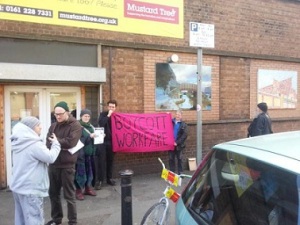 A protest was held outside Manchester homelessness charity Mustard Tree yesterday over their involvement with workfare. (h/t @gajagwyn)

There was a time when policies to send sick or disabled claimants on workfare, or sanction the benefits of lone parents, would have been met with horror by the electorate.  There have always been grumblings about the social security system, as with any other institution, but unemployment was once seen as a personal tragedy caused by wider economic failings, not a personal failing caused by laziness or the wrong attitude.

This change in public opinion did not happen by accident.  Just like immigration can be used to whip up and divide sections of the population, so can the social security system.  The implanting of the idea that somebody is getting something you aren’t, even if this isn’t really true, is an age old technique.  The grass on the other side of the valley is probably not greener, we learn that as children, but are still deceived by it.

You can see this at work in the comments made online during the broadcast of programmes like Benefits Street: “look, he’s got a chair, I work 4000 hours a week and can’t afford a chair.  Bastard.”  Of course this can’t be true.  It is virtually impossible to be better off on benefits than in work and most people understand this really.  People may appear jealous of those with a life so broken they find themselves queuing outside the off licence first thing in the morning, but they don’t generally want to trade places with them.

Behind the benefit bashing headlines however much more insidious ideas have been at work that have not come from the front pages of the Daily Mail.  The flawed notion that work is always good for you, in almost any circumstances, has become a medical consensus despite the evidence that shows that it isn’t true.  The belief that young people are idle and unemployable, and that only unpaid or forced work experience will fix them, is just as embedded within the Labour Party as on the Tory front benches.  The debate about poverty is no longer about reshaping society, but about reshaping individuals to teach them not to be poor anymore.  And work, meaning waged work for an employer, because all other forms of work no longer count, is now seen as the end point of any treatment or social care programme.

Without these shifts in attitudes amongst charity bosses, trade union leaders, so-called intellectuals and liberal journalists, then the scrounger rhetoric would have collapsed at the first suicide linked to benefit cuts.  The cartoon headlines have been matched with equal relentlessness by endless reports from anti-poverty charities and pious newspaper columns about how to fix the poor.  Foodbanks that come with conditions to attend bogus self-help schemes are cheered by the liberal press as innovative solutions, when the truth is that they are businesses hoping to profit from poverty.  Bosses of homelessness charities team up with coppers and Tories to warn people not to give money to beggars because it will only encourage them to be poor.  Disability charities and trade unionists alike rub shoulders with filthy profiteers like A4e and G4S at conferences and award ceremonies.

Of course these Ned Flanders wannabes line up to condemn the coarseness of the tabloid attacks on those receiving benefits.  Yet they reproduce the exact same ideology everytime they open their mouths. As such they are equally, if not more dangerous than any acid-tongued viper at the Daily Mail.  They have built the foundation upon which the rest of the poison depends.  A collective delusion has developed amongst the mainstream liberal left that the very worst thing you can do for someone in poverty is to give them money.  No wonder George Osborne has got a smile on his face.

A protest was held outside the Manchester based homelessness charity Mustard Tree yesterday over their involvement in workfare. Please help keep up the pressure online @themustardtree and on facebook.  You can also sign and share the petition.

This entry was posted in Poverty. Bookmark the permalink.