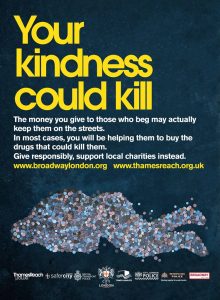 Nasty posters like these have become a regular feature in some cities in over the Christmas period.

Homelessness charities in two cities have decided to spread some Christmas love by urging people not to give money to homeless beggars in the cold Winter months.

A campaign spearheaded by Liverpool Council, with the backing of some local charities and the police, warns that “Your Kindness Could Kill” because many homeless people spend all their money on drugs or alcohol.  Elsewhere in Bath the message is more explicit, warning that the city has a reputation for being “easy to beg in” which could harm the town “socially and economically”.

These nasty campaigns began in 2003 when several London charities including Thamesreach and St Mungos teamed up with Tory Westminster Council to produce posters warning that beggars spend all their money drugs.  The message from the charities was clear, give the money to us instead.  Those whopping charity Chief Executive salaries won’t pay themselves.

There was a time when homelessness charities fought against this kind of lazy stereo-typing of homeless people who often face verbal and even physical abuse on the streets.  They might even have argued that addiction is an illness and not one that will be cured by making life even harder for those affected.  These days however they are squarely behind the ludicrous notion that the very worst thing you can do for someone in poverty is give them what they need – which is some money.

No-one’s life is going to be saved by a hot mug of soup or a quid from a passer by.  But it might just mean that person has a mildly less shit day because of the kindness of strangers.  And that applies whatever they spend the money on, which is as likely to be hostel service charges as drugs or alcohol.  Benefit sanctions and brutal social security cuts mean that more people than ever are likely to be begging for food or to put the heating on this Christmas.  They are just collateral damage however in this moral campaign to hide homelessness away and stop shoppers being bothered.

If these campaigns are successful and less money is given to beggars over the Christmas period then all that will mean is that those who were begging for food will go hungry and people with substance dependencies will have to beg for longer.  Or turn to other far more dangerous ways of making money, such as sex work or crime.  Nobody is going to suddenly come off heroin because of a few bad days begging.  Addiction doesn’t work that way, as these charities are well aware.

The sad truth is that Killing With Kindness campaigns have little to do with getting people off the streets and more to do with fundraising over the lucrative festive period.  Homelessness organisations, in particular the Big Issue who back the Bath campaign, are in direct competition for funds with people begging on the street.  They know that some people don’t trust charities and would rather give direct help.  They are using these campaigns to try and guilt trip the public into changing their behaviour in the nastiest way possible by pretending that if you give some money to a beggar it will kill them.

It’s never even occurred to the Ned Flanders wannabes running homeless charities that some people don’t care if beggars spend their money on drink or drugs.  Few people are heartless enough to begrudge a homeless person a drink at Christmas, even if they are a fucking alcoholic.  It’s not like those in charge of these charities are planning on opening up emergency detox centres on Christmas Eve. They’ll be too busy getting pissed along with everyone else.

This entry was posted in Housing and Homelessness, Poverty and tagged begging, Killing With Kindness. Bookmark the permalink.