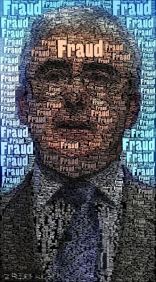 Minister for Welfare Reform Lord Fraud could do with some budgeting support himself after his recent trial to help benefit claimants manage their money proved to be an embarrassing flop that squandered £4 million of tax payer’s money.

Under Universal Credit all benefits will have to be claimed online, despite many claimants having no access to the internet and some having no experience of using computers.  Benefit payments are also to be made monthly and there is a minimum five week waiting period for new claims.  For the small group of claimants transferred onto the new system this in particular is already causing desperate suffering – a recent evaluation found that almost half of Universal Credit claimants were in rent arrears.

This was not supposed to be a problem according to comedy toff Lord Fraud who is over-seeing much of the introduction of Universal Credit.  A new budgeting support scheme would be set up to help the so-called vulnerable manage their money and teach them to use a computer.  Several trials were established to test how this scheme, named Universal Support, would be supplied.  These trials cost just over £4 million and the results are bleak.  An evaluation of the pilots published today found that Universal Support had “no statistically significant impact on either digital or financial capability.”

Perhaps the biggest flaw in this scheme to help those on Universal Credit manage their finances was that those involved in the trial were not on Universal Credit.  The areas in which the pilots were carried out did not include those places where Universal Credit has been introduced.  So what these trials really tested was the impact of Universal Support on people claiming benefits that are being phased out such as Jobseeker’s Allowance.  This meant that the pilots had to sort of pretend that participants were about to claim Universal Credit when they weren’t.  According to the evaluation this presented a significant barrier to people wishing to take up the support, which was offered by local councils, advice agencies and Jobcentres.  As one support workers involved in the trial said “Trying to get them to understand a system that’s not in place that may or may not apply to them at any given time is not very easy to do .”

Some Jobcentres of course managed to find a way round this reluctance amongst claimants to take part in the trials.  In a chilling example of how Jobcentre Work Coaches mislead and coerce claimants the evaluation reported that “Carmarthenshire and Dundee both reported that it was easier to encourage claimants to engage through Jobcentre Plus because they thought that the support was part of their Claimant Commitment.”  Several participants in the trials said they only took part because they thought it was mandatory.  In truth it was only in Islington that those carrying out the trial had the power to mandate claimants to attend under the threat of benefit sanction.

In the end just over half of those (51%) referred to Universal Support chose not to take it up.  Amongst those that did two key problems emerged which point to a worrying future.  The first impacted on those requiring help with using computers.  Both staff and participants involved in the trials said that many claimants depend on mobile phone for internet access, with one reporting “‘I would say the majority of the people we see have a mobile but many of them (a) can’t use it or (b) can’t pay for their broadband connection or (c) can’t pay it, don’t have the money to pay for a call or don’t have one at all.”  A further problem was that in more rural areas internet access is still limited and superfast broadband is rare.  Universal Credit is set to be ‘digital by default’.  If claimants cannot access the internet then they will not be able to manage their claim.

The second problem emerged amongst claimants accessing budgeting support.  The evaluation found that the most significant problem facing this group was not that they needed help learning to budget but simply that they didn’t have enough money.  As one person involved in managing the scheme said “It’s not a capacity issue in terms of actually being able to do the sums or being able to understand when to pay what when…what comes out is actually they just don’t have enough money to get from one of the months to the other.”

The evaluation does report that there were some ‘soft outcomes’ as a result of attending the scheme, with some claimants reporting a positive impact in areas of their lives which were unconnected to budgeting or computer skills.  This may reflect the fact many of the scheme were run as part of a wider package of support which also looked into areas such as housing, health, and of course employability.  The results of the overall evaluation of the scheme however found it made no difference in people’s ability to access IT or manage their money – although the researchers caution that only the short term effects of the scheme could be studied so far.  A cost/benefit analysis of the trial therefore showed that the £4 million spent on Universal Support was squandered, with no demonstrable benefits either to the public or the claimants themselves.

Just over 4000 people were referred onto Universal Support and actually took up the offer and engaged with services.  Many of them faced significant financial hardship and debt.  If Lord Fraud had better budgeting skills then he could have used that £4 million to chuck everybody a grand and actually give them some real help for a change.  But help is the last thing you can expect from a social security system devised by a former banker who has never been elected to anything.  Of course this will never affect Lord Fraud himself, who is a very rich man.  So the next time he wants to inflict a half-baked vanity scheme on benefit claimants he should fucking pay for it himself.

You can read the evaluation at: https://www.gov.uk/government/publications/evaluation-of-the-universal-support-delivered-locally-trials

This entry was posted in Universal Credit and tagged lord freud, Universal Support. Bookmark the permalink.