Fears that the psychological treatments to be introduced in Jobcentres will amount to little more than unscientific quackery look well founded with the appointment of a so-called stress and anxiety management company to provide service for claimants with a mental health condition.

Earlier in the month ITV reported that a company called Start Smiling Again would soon be working across several Jobcentres in South Wales.  According to Minister for Murdering Disabled People, Justin Tomlinson, this is part of a package of support that shows that supporting people with a mental health condition is a priority for the current Government.

Start Smiling Again are run by David Rahman, who calls himself a Coach & Blueprint Therapist.  It is unclear whether anyone else is currently involved in the company as their website contains no company information, landline phone number or address.  Instead potential customers are invited to call Dave on his mobile.  Classy fuckers.

David Rahman claims to be a bit of a miracle worker.  Not only can he cure stress, depression and anxiety, but even ME, CFS and Fibromyalgia – all previously thought incurable by real doctors.  According to Rahman 95% of his patients have made a full recovery based on his magical techniques.  It’s all in the mind he seems to suggest, and as soon as you find the root cause of your anxiety, depression or Chronic Fatigue Syndrome then your condition will disappear.  He calls this Blueprint Therapy.  He invented it.

Rahman boasts gaining Diplomas in Hynotherapay, Coaching and Neural Linguistic Programming (NLP) along with being a trained practitioner in ‘Time Line Therapy‘ and ‘The Chrysalis Effect’ (don’t ask).  Most of these diplomas were gained at the esteemed NLP training centre Inspire 360 where some courses last as long as a week!

If Rahman has any real qualifications in mental health or psychology he makes no mention of them – his background is as an optometrist. Proper psychologists don’t generally spend their days posting endless self-help messages on social media like the one above claiming that insanity means being unhappy and not being prepared to change the way you think.  He also runs a sideline in writing ebooks such as this one on how to attract women and his misogynist streak shows in his recent facebook posting. 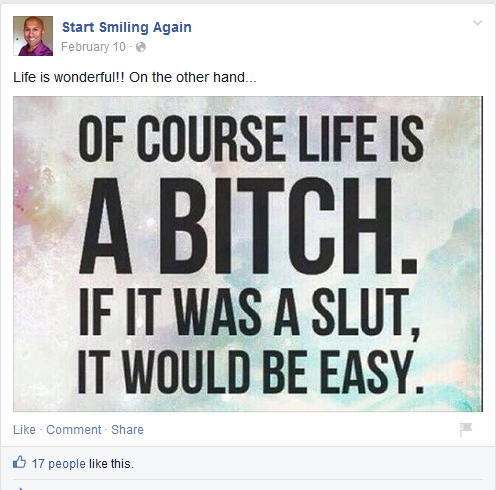 And he thinks he’s a lion.

Rahman should fit right in at the Jobcentre which is riddled with this glassy-eyed nonsense but the appointment of his company is a new low even for the DWP.  Ever since plans were announced to introduce Improving Access to Psychological Therapies (IAPT)  into 350 Jobcentres serious concerns have been raised not just about the quality of this coerced ‘support’ for claimants with a mental health condition, but also the ideology that lies behind it.  Iain Duncan Smith seems to think that all someone with a mental illness needs to do to get better is cheer up and start applying for jobs in Tesco. And if that doesn’t sort their life out he’ll stop their benefits to teach them a lesson.  And now he’s got a lifestyle guru to force people to start smiling again.  Or else.

It is genuinely horrifying that unscientific drivel like this is soon to be inflicted on some of the most marginalised people in the UK.  People who have often lived through desperately traumatic events, or have serious and complex mental health conditions and could have their lives demolished by this kind of horseshit.  The DWP is now at risk of actively harming the mental health of all those unlucky enough to be forced to depend on Jobcentres.  It is time for  mental health workers, from psychiatrists to charity workers, to get behind those they support and find ways to bring down and discredit the current DWP regime.  Anything else now is collaboration.