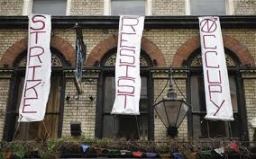 As homelessness in the capital soars, three senior Labour Party figures have launched an all out attack on homeless people by demanding new laws to protect property developers and landlords from squatters.

Head of Lambeth Council, Lib Peck, MP for Streatham and Shadow Business Secretary Chuka Umunna along with Dulwich MP Tessa Jowell have all signed a joint letter this week written to bungling Justice Secretary Chris Grayling demanding that the squatting ban be extended to commercial properties.

Showing exactly whose side they are on – and it ain’t ours – the treacherous trio claim:

“Unfortunately, the problem of squatters for commercial property owners has since worsened, and Lambeth has seen an increase in the number of squatters now specifically targeting non-residential buildings. Extending the law to protect businesses would be a welcome move.”

The letter contains examples of spurious claims about squatters damaging property, even stooping as low as claiming that an attempted suicide in one squat is a reason that this vital lifeline for homeless people should be banned.

One of these squats was Patmos Lodge, a former care home which had been home to 100 previously homeless residents until they were violently evicted on the orders of Lambeth Council.  The Council want to demolish the building and flog off the land, no doubt to property developers looking to build yet more yuppy flats.

Multi-millionaire property tycoons have long attempted to blame squatters for damage caused to buildings left abandoned as investments, or simply because they’re so fucking rich they can afford to leave a property empty. They seem to believe they have a divine right to occupy large swathes of city centres, leaving buildings to become derelict eyesores until they judge it profitable enough to bother knocking them down and turning them into luxury flats that local people could never dream of affording.

Meanwhile at least one homeless man has died as a direct result of the ban on squatting in residential properties.  Daniel Gauntlett was just 35 years old when he was found dead of hypothermia outside an empty bungalow in Aylesford at the end of February.  Reports claimed he had previously attempted to sleep inside the boarded up property but had been prevented after police were called.  The  bungalow was due to be bulldozed.

When this death was reported MPs calling for further bans on squatting didn’t even blink in the face of the desperate consequences likely for some due to these new laws.  It is better to them that someone poor dies in the gutter than the rich be mildly inconvenienced when it comes to renovating their property portfolios.

Yet this tragic death revealed the truth about the squatting ban, which is not that it was intended to stop families coming home from holiday to find squatters living in their home.  There were always more than adequate laws to prevent that.  This law was introduced to protect the investments of the rich, with callous disregard for those who find themselves without a bed for the night and may seek to take life-saving shelter in an abandoned building.

According to a letter published in The Guardian last March, not one of the 33 people arrested in the first six months of the squatting ban – 3 of whom have received prison sentences – involved squatters displacing people from their homes.  Yet this law built on lies, which many housing lawyers say should be repealed, isn’t enough for these three senior Labour figures who want yet more penalties for homeless people trying to avoid death by seeking a roof for the night.

Both Tessa Jowell and Chuka Umunna are yet more chinless public school wonders living pampered lives and are not likely to have ever experienced the stark terror of being without a home.  They are far more likely to empathise with grasping property developers complaining that their precious investment is being harmed by homeless plebs.  And so they are quite happy to team up with a vile Tory Minister like Chris Grayling in a bid to strip away what’s left of a centuries old right for the destitute and the homeless.

When it comes to fucking over the poor, whether Labour or Tory, they really are all in it together.

Visit The Squash Campaign or squat.net for the latest news on the fight to save what’s left of squatting rights, Eviction Resistance for direct ways to fight back and the Advisory Service for Squatters if you need legal and practical advice.

The letter to Grayling is at: http://lambethnews.files.wordpress.com/2013/09/fao-chris-grayling-mp.pdf