Backlash To Benefit Bashing Is Only Just Beginning 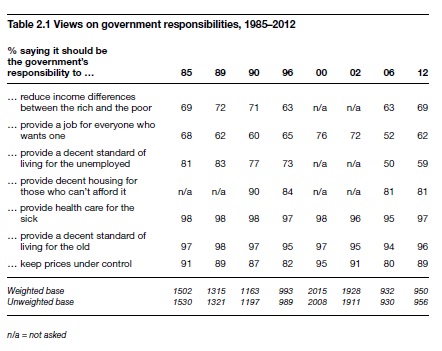 The reported shift in public opinion in favour of social security spending is likely to be just the beginning as yet more horrific tales emerge of poverty and homelessness due to Iain Duncan Smith’s welfare reforms.

The findings of the British Social Attitudes survey released this week suggests that despite this Government’s benefit bashing rhetoric, public opinion is starting to shift in favour of claimants.  The key findings are that only 51% of people believe benefits are too high and discourage work – compared to 63% in 2011, whilst 34% of people support more spending on benefits compared to 28% the previous year.  Another encouraging finding is that almost half of people (47%) believe that further cuts to benefits would damage too many people’s lives.

From the endless thunderous headlines in some sections of the press – often dripping with DWP concocted lies – it would be easy to assume that everyone in the UK is the kind of swivel-eyed, money-grabbing Jeremy Clarkson wannabe the Daily Mail would like to pretend represents the average citizen.  As the above table shows, the reality is very different, with consistent support reported for wealth redistribution (69%), a decent standard of living for unemployed people (59%), support for housing for those who can’t afford it (81%) along with nationally funded healthcare (97%) and pensions (96%).  These figures have remained constant for almost 30 years showing that support for the welfare state has remained solid even if some opinions on the finer details have become warped by the stream of propaganda.

What will terrify Tory spin doctors however is that this change in opinion is only likely to be the beginning.  This survey was carried out in 2012, before almost all of the most savage cuts to social security had been introduced.  Many of the most vicious cuts such as the Bedroom Tax and Benefit Cap were still distant threats that had barely made the headlines.  The shambolic unraveling of Iain Duncan Smith’s bungled Universal Credit project was only just starting to become apparent, and whilst the Work Programme was hardly setting the world on fire , no-one back then realised what an eye-wateringly expensive shambles it would turn out to be.

The impact of the Bedroom Tax is currently demolishing the lives of hundreds of thousands of people, but the inevitable wave of evictions is still some months down the line.  The Benefit Cap – still not introduced everywhere – has already seen homelessness in London soar, whilst everywhere else the number of homeless families creeps steadily upwards.  Atos are only half way through assessing claimants on sickness and disability benefits meaning the desperately sad tales of chronically ill people found fit for work, or driven to suicide by the ruthless regime, are set to continue.

The new claimant conditionality for unemployed people is likely to result in a huge increase in the use of benefit sanctions, which are already expected to top a million this year.  Every claimant sanctioned is someone left with almost nothing at all, and forced to either depend on foodbanks – or in the words of one homelessness charity, beg and steal to survive.

Meanwhile the lurid stories of benefit claimants living in two grand a week mansions which have been used to drive the benefit slashing agenda have now all dried up due to the benefit cap.  In reality these only ever reflected a handful of extreme cases; usually large homeless families in emergency and temporary private rented accommodation.  Now those families are forced to share a room in a grotty B&B, or face being socially cleansed from the area in which they may have lived their entire lives.  This will make for a for different kind of headline, and not one you’re likely to see in the Daily Mail anytime soon.

Unfortunately for the Tories, you can’t fool all of the people all of the time, and increasingly this bunch of clowns aren’t fooling anyone.  And that’s why all they have left is spite.  Even the Daily Mail loyalists seem to have been repulsed by freakish Michael Grove’s latest comments that people dependent on foodbanks have only got themselves to blame.

Meanwhile internet con-man Grant Shapps’ has dismissed UN concerns over the Bedroom Tax as a ‘disgrace’ from ‘a woman from Brasil’ – a statement which hints at the festering misogyny you might expect to come from a man who used to make his money flogging sleazy guides on how to pick up women.

It’s hard to know where the next big benefit bashing stories will come from as social security is cut to the bone.  This doesn’t mean they will stop.  Expect more drip-fed propaganda about a disabled person caught  playing golf, or a single mum who has the cheek to have a boyfriend.  As desperation mounts to maintain the hate for the very poorest they will stoop lower and lower, because without this hate – which has defined the current administration – the Tories haven’t really got much to offer.  And so they will retreat into their all too familiar world of bigotry, selfishness and naked greed.  Meaning  once again the public will see the true face of a very nasty party that should have been consigned to the dustbin of history in the last century.

96 responses to “Backlash To Benefit Bashing Is Only Just Beginning”