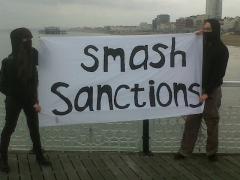 A petition posted on the 38 Degrees website late yesterday afternoon and which calls for all benefit sanctions to be scrapped without exceptions has hit almost 2000 signatures already.

The petition – which wasn’t posted by me – uses some of the text from this earlier post discussing the brutal impact of sanctions to benefits which are driving hundreds of thousands of people into destitution.  Tens of thousands of sanctions are handed out every month for the slightest breach of Jobcentre diktats.  Single parents and most people on out of work sickness and disability benefits also face sanctions and this brutal system to soon to be inflicted on low waged part-time workers and people in precarious  self-employment.

A recent report from Citizens Advice warned that sanctions are creating desperate poverty with tragic stories of people going through bins to find food, attempting suicide and becoming ill due to having all money stopped.  Sanctions can now last up to three years.

No government ever changed anything because of a petition.  Power needs to be forced to make concessions, not asked nicely.  But strong support for this petition will show that there are many people in the UK who reject completely the idea that anyone should be left unable to feed themselves or their children in one of the richest countries in the world – for any reason.

The WOW Petition, calling for an impact assessment into welfare reform, is also approaching nearly 100,000 signatures, so sign that too: http://wowpetition.com/

This entry was posted in DWP, Fighting Back, Welfare Reform and tagged 38 Degrees petition, benefit sanctions. Bookmark the permalink.