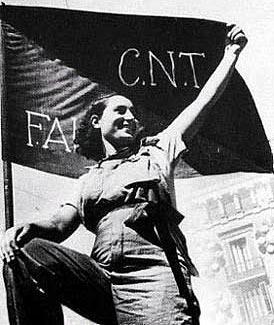 In a humiliating snub to Trotskyite factions everywhere, Iain Duncan Smith has credited anarchists as the driving force behind his Department’s decision to drop benefit sanctions on the Work Experience scheme.

Speaking on Radio 4 the Secretary of State claimed ‘out of touch’ anarchists and Trade Unions were behind the campaign against forced labour.  This came at the same time as the Government conceded to anarchist demands that sanctions be removed from the scheme.

The battle against workfare is just warming up.  The announcement only applies to the Government’s Work Experience scheme aimed at young people.  The far larger Work Programme, which can see claimants mandated to work for six months with a private company was not mentioned in the announcement.  Neither was the Government’s Mandatory Work Activity scheme, essentially Community Service for claimants deemed to be not trying hard enough to find work, which can even apply to those already in part time work (more on this soon).

George Osborne said last year that young people who refuse Work Experience “will be considered for mandatory work activity, and those that drop out without good reason will lose their benefits.”

There has also been no statement from the Government on recent revelations that sick and disabled people are soon to be  bullied into forced labour or face benefit sanctions.

The Government have been pretending that Work Experience is the only forced labour scheme.  This is far from the case.  This Saturday’s Day of Action Against Workfare is more important than ever.  Just one last push is needed to break workfare for good.