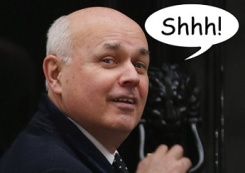 Repeatedly over the last few months the Tories have cheered that there are more people working than ever before as if this was some kind of fucking miracle.  In truth it is exactly what you would expect in a growing population.  Unless the economy is in the grip of recession there are almost always more jobs than ever before.  More people means more jobs.  They all have to shop.

According to the Office for National Statistics the total size of the UK’s workforce – which means all of those working, unemployed, or economically inactive, such as long term sick – has grown by 2.6 million since 2010.  In that period the number of people in work has grown by 2 million.  The disparity is partly down to the rise in women’s pension age, a bodge in how the figure are recorded means that all women under 65 are now included in the workforce, even if they are retired.  Previously only women under 60 were included.

The Employment Rate, the percentage of people in work, has only shifted upwards by about a percentage point, from 72.1% to 73.3%.  That’s around half a million people, which is just under the growth in the number of people who have become self-employed since 2010.  How many of them are making any money is anyone’s guess, but we do know that average earnings from self-employment are plummeting.

One of the reasons for the growth in both population and new jobs is migration.  In an astonishing fact, curiously ignored by the Tory press, there are one million more people in employment who were not born in the UK than in 2010.  That’s over half the growth in jobs during the current administration.*

What those million new workers tell us – and some will be UK citizens who happened to have been born overseas – is that most of the growth in jobs has fuck all to do with Iain Duncan Smith’s bungled welfare reforms.

To look at the impact of social security policies means delving into the unemployment figures, and crucially long term claimants.  Figures quietly released last week showed that the number of people who had been on benefits for three out of the last four years has fallen by just 91,000 since 2010.  This is despite economic growth, the Work Programme, mass benefit sanctions and the country recovering from a deep recession.  And even this figure is likely to be revised down as more data comes in.

There were just over 600,000 fewer unemployed people recorded in the latest figures than there were in the last period of the previous Government, and there are still almost 2 million of them.  Most of the jobs the Tory’s are claiming have been created have not gone to people who were unemployed.  And the quality of these jobs is also relevant.  People can be included as offically in employment if they are on workfare for example – although there are currently less people on unpaid work schemes than during the Labour administration.

As well as the growth in self-employment, nearly half a million of the new jobs are part time.  You only have to be working a few hours a month to be classed as employed.  The growth of zero hours contracts is well documented.  The quality of most of these new jobs is shit.

The Labour Market Statistics, on which all this information is based, are messy, not least because they are based on a survey.  What they suggest however is that unemployment has fallen, but not by that much, and that many of the new jobs are part time or low earning self-employment.  This is hardly a great fucking success story for a country emerging from a recession.

Perhaps a better guide to what is really going on are the Housing Benefit statistics.  This is an exact figure and reveals the number of people who need help to pay their rent.  The only two criteria for claiming Housing Benefits are a low income and low or no assets.  By the very nature of the benefit, everyone who is claiming it is poor.

There were 4.751 million people claiming Housing Benefit in May 2010.  In November 2014, the latest month for which figures are available, there were 4.883 million claims.  More people are poor now than before the Tories weren’t elected, despite the so-called jobs miracle   And that is the figure on which Iain Duncan Smith’s welfare reforms should be judged.

*Before anyone starts feeling all UKIP remember this is not a one way street.  A study released last year found that up to 70% of graduates are planning to fuck off soon in the search of somewhere less shit.  For every Polish builder who turns up we might soon lose a marketing graduate from Surbiton.  On balance we’ve probably got the better end of that deal.  Whatever your views on immigration policy, the very worst thing that could happen is for working class people of different nationalities to be be tricked into fighting each other over the scraps they hand down.  The capitalist class of Europe – the bankers, property developers, business owners and landlords – are united.  We need to be as well.

Join the Week of Action Against Workfare and Benefit Sanctions beginning on April 26th.