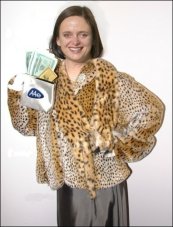 Former A4e boss Emma Harrison made millions out of the welfare-to-work scam before retiring just as the company became mired in fraud allegations.

If there is one place that a culture of worklessness really does exist it’s in the offices of the companies running Iain Duncan Smith’s Work Programme.  Some welfare-to-work advisors have been languishing on tax-payer funded salaries for years whilst barely lifting a finger.

Last week the DWP published an update of the Minimum Service Delivery standards for all of the main Work Programme providers.  These are the very basic levels of service that everybody referred to these companies can expect to receive as promised in their contracts with the DWP.  As the document reveals, you shouldn’t expect too much.

Appallingly a claimant on Employment Support Allowance can expect to wait eight weeks before Maximus will be bothered to help them produce a CV.  Those placed with the notorious A4e will only have contact with a named advisor once a month, whilst the most other providers are offering is just fortnightly meetings.  At these meetings participants are likely to be given a string of conditions they must meet, which might include workfare, or they will have their benefits stopped.  Then they’ll be politely asked to fuck off for another fortnight.  And that’s the Work Programme.  That’s the wonderful, flexible, intensive, tailored to the individual, innovative, half-arsed piece of shit that bungling Iain Duncan Smith has so far wasted close to a billion pounds of our money on.  And that’s why the performance of the scheme has been so dire and you are more likely to have your benefit sanctioned than find a job on the Work Programme.

It wasn’t supposed to be like this of course.  Whilst Work Programme providers were initially paid a small fee for every participant, this has been gradually reduced.  The bulk of the funding comes from those who find work – with payments of up to £13,000 should claimants from some groups find and stay in a job.  This payments-by-results funding model was intended to ensure that whilst these companies are free to do as little as they choose to help people find jobs, if they are not successful they won’t get paid.

The problem with this model is that people get jobs under their own steam every single day.  The welfare-to-work sector barely existed before Tony Blair launched the New Deal in 1997 yet for hundreds of years people had been managing to find jobs without any help at all from an A4e Work Coach.  What this means is that even if these companies do nothing at all they will still get paid as long as they can claim the credit for these people finding jobs.  It is a scam, and it always has been.

Since these companies are guaranteed a large chunk of tax payer’s cash whatever they do they have two choices.  Firstly they can target their resources at the so-called hardest to help, which means people with little work history, extensive criminal records or who face other problems such as homelessness or addiction.  This is expensive however and a big gamble.  Employers are not rushing out to hire street drinkers or those with a conviction for violence after all.  And even if they find someone from this group a job, if they lose it then the company will lose most of their job outcome fee.  That’s why Maximus, and their charitable partners the Careers Development Group, are using ‘expert volunteers‘ to provide help for those “identified as having substantial barriers to work”.  It’s much cheaper that way.

The second, and most profitable option for these companies is to do nothing at all.  The job outcome payments will roll in regardless, so they make their money by keeping expenditure to an absolute minimum.  Of course they can tinker round the edges.  They can bully someone into a shitty job when if that person had held out a bit longer they would have found themselves a better job in their usual field.  They can ensure that someone who is at college is forced to leave and take up minimum wage work rather than use a short period of unemployment to gain a qualification and further their career.  They can pressurise someone into becoming self-employed and claiming Working Tax Credits even if that self-employment is unlikely to result in any real income.  There’s lots of ways they can tinker round the edges and almost all of them involve fucking up someone’s life.

The tragedy is that all that money squandered on the Work Programme could have been so much better spent.  Imagine if you walked into a Jobcentre and they told you about a course you actually wanted to go on.  A course that would train you in a real job – to be a spark, a chef, a beauty therapist or IT programmer.  Imagine if you could pick up a fork lift truck licence, or even driving lessons.  Or find out about a community project providing genuine and interesting volunteering.  Or even just have access to a half decent computer, stamps, fares, a phone and stationary so you can get on and find a job yourself.

But even that is beyond the welfare-to-work sector who instead sit on their arses all day sanctioning people’s benefit claims because they were five minutes late to their monthly meeting.  And for that we pay them hundreds of millions of pounds and make their bosses very, very rich.

Join the Day of Action Against Maximus on March 2nd.