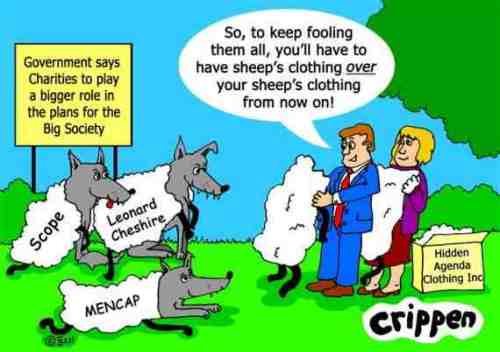 The YMCA, one of the UK’s leading advocates for workfare and benefit sanctions, have joined a campaign which demands that “no one should go hungry because they lose their job or become homeless because they get ill.”

The Who Benefits campaign was launched this week in an attempt to change the negative stereotypes of those claiming benefits and calling on the Government to do more to  “focus on the real reasons that people are struggling, like low wages, the high cost of living and the housing crisis.”

The campaign is backed by 80 charities and so far seems to be little more than a website listing the corporate logos of the charities involved and a call for people to tell their stories of life on benefits.

Homeless charity YMCA are featured on the list despite their involvement with mandatory work schemes.  YMCA have freely admitted to using forced volunteers on mandatory Government programmes to staff their shops at both a local and national level.  Claimants sent by Jobcentres to undertake this unpaid work could face having benefits stopped completely for up to three years if they refuse.  It seems that this campaign is quite happy to work with an organisation who will leave people to go hungry if they don’t attend their workfare placement in a YMCA charity shop.

Several others charities involved in this campaign, including MIND who co-founded the project, hold Work Programme sub-contracts – meaning they too are actively involved in sanctioning claimant’s benefits.  Disability Rights UK (DRUK) are also on the list, an organisation which has worked hand in glove with the DWP throughout Iain Duncan Smith’s welfare reforms.

There is no doubt that the image of the so called third sector has taken a battering over the last couple of years as grassroots campaigns have exposed the cosy relationship between charities, this Government and poverty pimps like A4e, G4S and Working Links.  Yet the inclusion of the YMCA in this project, along with the dogged refusal of the big disability charities to pull out of the sanctions regime completely, does not suggest that a radical change of heart has taken place.

Which begs the question who really benefits from this campaign?  Is it benefit claimants, disabled people and those condemned to poverty or forced work by benefit sanctions.  Or is it charities who hope a cheap website and some weasel words will help restore their reputation whilst behind the scenes it’s business as usual on the welfare reform gravy train.

Above pic from Crippen Cartoons