When Politics Is This Broken It’s Time To Get Out In The Fucking Streets – Starting Tomorrow, 3pm Conservative HQ 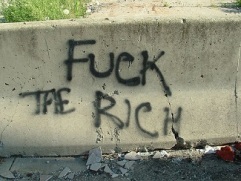 If yesterday’s election showed anything it is that most people do not want a Tory government.  Just 20% of the public voted Tory – the same proportion of the population the Office for National Statistics estimates have a personal wealth of over £600,000.  The rich are in charge despite what the rest of us want.  As usual.

No matter what might have happened yesterday the rich would still be in charge.  The UK’s electoral system has been designed over hundreds of years to ensure precisely that.  In Scotland the whole country can vote on mass to reject both of the main political parties and it doesn’t make a blind bit of fucking difference.  A million people can vote Green and nearly four million UKIP and nothing will change.  Although the UKIP thing is pretty funny.  Bye Nigel.

Already some in the Labour Party want to lurch even further to the right as if Ed Miliband really was the comedy communist some sections of the press protrayed him as.  This is a party that just lost dozens of seats to the SNP who want to build council houses, scrap Trident and halt many of the most vicious welfare reforms.  Despite what’s staring them in the face Labour still think that being more Tory is the only thing that will lead them to success.  They don’t give a shit about the people who actually did vote for them, in Northern England, London and Wales.  There is no voice for the poor, at all, and that is the way it’s intended to be.

When politics is this broken then all that is left is the streets.  For the last five years the real opposition has not been the Labour Party, but disabled people, benefits clamaints, students, tenants and the low or no paid.  As bleak as things may seem today we are in a better position than we were last week.  The Tory majority is paper thin.  Scotland is rising.  The Libs Dems are dead.  Welfare reforms are still in chaos and Iain Duncan Smith is still a fucking idiot.  And Minister for Employment Esther McVey is now unemployed.

London Black Revs have called a protest tomorrow (Saturday 9th May) outside the Tory HQ in London.  The sooner we get back out on the streets the better.  Please help spread the word, meet at 3pm, Conservative Campaign Headquarters, 4 Matthew Parker St, London SW1H 9HQ.  Visit and share the facebook page for more details.