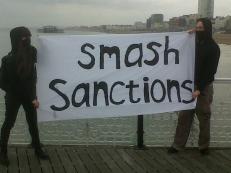 The Manchester Evening News (MEN) has reported a ‘massive’ rise in street homelessness with benefit sanctions singled out as one of the main causes.

The paper carried out an investigation into rough sleeping in the region claiming that people are living in ‘caves, old air raid shelters and under a supermarket.’  Two charities working on the frontline told the MEN that benefit sanctions are to blame for the rise in homelessness, with one citing the case of a man who had been sanctioned seven times and left unable to pay his rent.  One charity worker told the paper: “Whereas before, most homeless people had benefits, now they have nothing.”

Officially the number of people sleeping rough in Greater Manchester is just 24.  One local charity however claims there are around 60 street homeless people in Stockport alone, whilst local councillor Daniel Gillard told the MEN he believed around 150 people were now sleeping rough in Manchester City Centre.

National statistics on street homelessness are based on little more than a guess and the government is determined to keep things that way.  Previously local authorities who believed they had more than ten rough sleepers in their jurisdiction were required to carry out an annual ‘street count’ and report their findings back to the Department of Communities or Local Government (DCLG).  Following changes made last year they are now only required to provide an ‘estimate’ of the number of street homeless people.

The DCLG used to provide some monitoring of the procedure for recording rough sleeping figures however that responsibility has now been passed onto the charity Homeless Link who will rely on volunteers to do the work from their “member agencies and interested faith groups”.

Even when councils can still be bothered to carry out a street count the true number of homeless people is likely to be woefully underestimated – sometimes perhaps even deliberately.  When the first street counts were carried out in London they were largely believed to have been fixed with widespread stories of the police clearing the streets of homeless people before the count took place.

Street counters are warned not to venture anywhere they feel unsafe and not to record people living in squats, on camp sites, organised protest sites or travellers.  Unlike homeless people, street counters do no break into parks or other areas which may be closed to the public at night and therefore safer to sleep in then on the High Street.  Only those spotted asleep, or in the process of ‘bedding down’ are included in the count, ignoring the large number of homeless people who wander the streets at night and try to sleep in the day time.  Few street counts extend far out of city centres and therefore miss the people hidden away in local communties, or camping, or sleeping in cars and other vehicles because they have nowhere else to go.

Despite all of this, the number of street homeless people that do get recorded in the figures has still soared under this Government, by around a third between 2010 and 2013.  The figures for last year are set to be publised next month and are unlikely to be worth the paper they are written on.  But as the Manchester Evenings News found, and we can see all around us, this most damaging form of homelessness is becoming much worse and it is far from just a London problem.

This blog has no sources of funding so here’s a quick reminder that you can help ensure it continues by making a donation, and many thanks to those that did over Christmas!