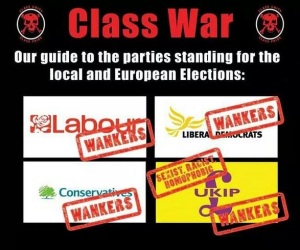 Steve Norman, who will be standing as a candidate for Class War in next year’s general election, has trounced the Lib Dems in a Bristol constituency where he polled just under 4% of the vote.

Norman stood as an independent candidate in Avonmouth in preparation for Class War’s planned assault on next year’s elections.  In a stunning early victory for the campaign he polled 135 votes, just behind the Green Party and beating the dismal performance of the Lib Dems who could only manage 108.

These results will also be worrying news for the dreary Trade Union and Socialist Coalition (TUSC).  Norman polled over eight times higher then their candidate who could only manage a lacklustre 16 votes.

If a bunch of retired colonels, city spivs and chinless public school wankers like Nigel Farage can send shockwaves through the Labour Party then imagine what a populist party of the left could achieve.  A party that unlike UKIP doesn’t want to flog off the NHS and would never dream of referring to benefit claimants as a “parasitic underclass of scroungers”.  Instead Class War have pledged to double all benefits and scrap bills for pensioners.  And all to be paid for by fleecing the rich.  Who could argue with that?

The choice will be simple.  If you want more money in your pocket vote Class War next year and in the meantime support the election campaign.  Because all of the rest of them are wankers.