Support The Focus E15 Mothers Fighting For Their Children’s Future 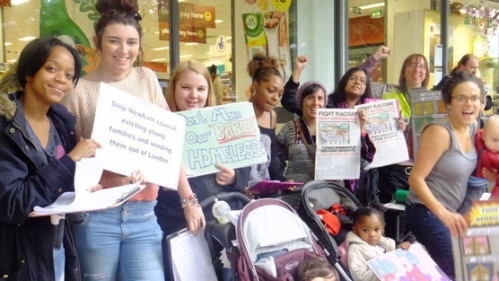 The appalling treatment of a group of homeless single mums at the hands of Newham Council shows beyond doubt that the modern Labour Party are no friends of the poor.

The young mothers are being evicted from the Focus E15 hostel in the Labour controlled borough after the Council announced plans to cut costs by closing the hostel.  This is the same council who recently spent an astonishing £111 million pounds on an office block complete with chandeliers costing almost £2000 each!

Despite this vast display of wealth, Newham Council has chosen to turn their backs on some of the borough’s poorest residents and has not even offered a council property to the mothers.  Instead they have been abandoned to the cut-throat private rental sector with the Council attempting to blackmail the mothers into accepting a private sector tenancy for just one year or facing no help with housing at all.

Eye-watering rents, along with vicious cuts to housing benefits, mean most of London is now unaffordable for low income households with children.  Grasping and out of control landlords demand huge sums of money up front to secure a tenancy, leaving finding a private sector rented property near impossible for Londoners on a low income.

The mothers rightly fear being socially cleansed from the capital as rents climb out of reach even in cheaper boroughs like Newham.  According to the website home.co.uk, the average rent for a two bedroom flat in Newham is £1,120 per calendar month.  The maximum available Local Housing Allowance (Housing Benefit) in Newham for a property that size is just £919.79 per month.

The mothers have launched a fierce fightback against this contemptible move by Newham Council, with a series of demonstrations, weekly info stalls and even an occupation of the council’s housing offices.  The Council’s response has been to ban journalists from public meetings and do everything they can to ignore the women’s demands.

The behaviour of Newham Council should shatter any lingering delusions that things will somehow be better if Labour manage to win the next election.  This is how Labour behave in power, attacking those with least whilst lining their own pockets at our expense.  Every child deserves a secure home to grow up in wherever they happen to be born.  The inspiring campaign by the E15 Focus Mums deserves huge support as they fight not just for homes for themselves but for all those who need them.

Only determined and sustained collective action can bring an end to the ongoing and vicious war on the poor being waged by all main political parties.  These young mothers, in one of the poorest areas of London, are showing the way, and we should all get behind them.

Visit Kate Belgrave’s blog for the latest coverage of the campaign and other stories highlighting the real and tragic impact of austerity on people’s lives.

Posted in Fighting Back, Housing and Homelessness, Poverty