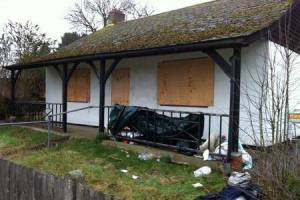 In a tragic story which fell largely by the wayside, a homeless man died of hypothermia earlier this year after sleeping in the doorway of an abandoned building in Aylesbury, Kent.

Daniel Gauntlett was just 35 years old when he was found dead outside the empty bungalow at the end of February.  Reports claim he had previously attempted to sleep inside the boarded up property but had been prevented after police were called.  The  bungalow was due to be bulldozed.

Some housing campaigners have laid the blame for his death directly at the feet of Mike Weatherley, the Tory MP who proposed the legislation which makes squatting in any residential property a criminal offence.  It is not just Weatherley who has blood on his hands.  Almost every Labour MP also voted for the new laws which were not only built on lies but removed an ancient and historic legal right.

Dishonest MPs claimed the new legislation was to prevent squatters taking over properties whilst people went on holiday following a string of lurid stories in the right wing press.  In truth there were already more than adequate laws to prevent this from taking place.  A letter recently published by The Guardian and signed by 40 top lawyers claims that of the 33 known arrests so far not a single one has been due to someone being displaced from their home by squatters.  At least 3 homeless people are known to have been jailed under the new laws.

Every measure of homelessness has risen since this Government weren’t elected – a situation that seems set to become far worse as rents soar, wages stagnate and housing benefits are slashed.  On top of this 660,000 people face homelessness and destitution due to the bedroom tax, whilst George Osborne wants to sell off even more council houses.

This is far from the first and nor will it be the last death as a direct result of this vile Coalition’s policies, many of which seem to be based on panicky responses to tabloid lies.  It seems that the only people gullible enough to believe everything they read in the Daily Mail are now running the country.

Not content with one death due to his legislation Mike Weatherley(@mike_weatherley) is now attempting to have squatting banned in abandoned commercial premises as well. For now this is still legal.  Visit the Advisory Service for Squatter’s website for information, advice and support or SQUASH to keep up with the campaign to get the law repealed.