A whole host of corporate vultures have teamed up with the DWP to launch an online campaign celebrating young people being coerced into working for no pay for some of the richest companies in the UK.

Marks & Spencer, Whitbread, Halfords and shamefully the BBC have all signed up to the #WEcan campaign which aims to encourage even more businesses to provide unpaid work experience positions instead of employing young people properly.  The new initiative comes as the Government draws up plans to force all unemployed young people into permanent unpaid work if they are unable to find a job within six months of becoming unemployed.  This means they have to find enough grubby companies and so-called charities who are prepared to take part in this shocking exploitation.  The #WEcan campaign is part of an attempt to achieve this, so let’s fuck it up.

Already parasites from the welfare-to-work industry are tweeting using the hashtag #WEcan whilst a tumblr page has been set up calling for young people to share their experiences of workfare.  The DWP have also posted a host of youtube videos (comments currently enabled) such as this one which says that “whatever you are doing, any experience is good experience”.  Gone is any pretence at providing placements which involve real training or a chance of a job at the end.  Instead they want young people to mop floors and stack shelves for two months and have the fucking gall to claim they are doing them a favour.

Please help spread the word about this and tweet using the hashtag #WEcan.  And let’s make sure everybody knows which companies are using workfare, starting with @marksandspencer, @premierinn, @Halfords_uk, @WhitbreadPLC, @Barclays and @BBC.

For the latest news on fighting back against forced unpaid work visit: http://www.boycottworkfare.org/

I’m still on a break.  Back properly in a week or so.

Week Of Action Against Workfare Begins: Take on the High Street Workfare Exploiters 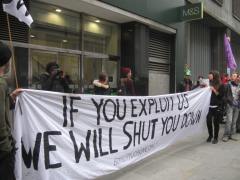 The anti-workfare occupation of Marks & Spencer’s facebook page stayed solid over the weekend and shows no signs of dying down today after Boycott Workfare’s call for online action against high streets shops using unpaid labour.

Joining M&S in the workfare hall of shame are B&M Stores who were recently given a workfare exploiter of the year award by ERSA – the lobbying body whose job it is to lie on behalf of the fraud ridden welfare-to-work industry.

Also on the list are ASDA who are saving themselves money everyday by not paying their staff.  They’ve even been happy to suck up to the DWP and help them relaunch the Work Experience scheme if it means they get lots of free workers.  ASDA are on twitter @ASDA and facebook at: https://www.facebook.com/Asda

Overpriced sandwich shop EAT are also a target after it was revealed they take part in the Sector Based Work Academies scheme – meaning they get free staff for six weeks at a time.  As Boycott Workfare point out: “Their website invites ‘Some real honest feedback’. Please feel free to oblige.”

Finally, and proving you really can’t trust hippies – especially ones who run a supermarket – Whole Foods Market are also known to be involved in the Work Academy scheme.  Stores are represented individually on social networking, Boycott Workfare recommend starting with the Camden and Stoke Newington branches.

For full contact details for all of these companies visit: http://www.boycottworkfare.org/?p=2730

Pickets, info stalls, workfare walks of shame and surprise visits will be taking place all week as part of the Week of Action Against Workfare.  There will be a different online action announced everyday on the Boycott Workfare website.  Tomorrow get ready to take on the annual welfare-to-work conference where the workfare industry will be shoveling vol-au-vents down their necks whilst tweeting on their tax payer funded smart phones using the hashtag #w2w2013

Please help spread the word about all events! 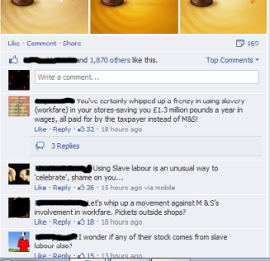 Hundreds of people bombarded Marks & Spencer on social media last night after the company boasted of their use of workfare earlier in the week.

The company were forced to lock down their facebook page in an attempt to silence criticism and are now preventing people from posting on their wall.  This has simply led to people leaving hundreds of comments threatening to boycott the company on their gaudy posts advertising over-priced food instead.

Things are not likely to get any better for the company with a Week of Action Against Workfare beginning this Saturday where they will face further protests along with other greedy companies who don’t pay their staff.

As well as online and offline action targeting workfare exploiters the week will also see people leafleting Jobcentres and providing information to claimants about their rights.

Let the workfare profiteers know: If you exploit us, we will shut you down!

Posted in Fighting Back, JSA/Workfare/Work Programme

2% Of Our Workers Don’t Get Paid Boast Marks & Spencer

In a brave public relations move Marks & Spencer are boasting how they intend to staff their dreary stores with over a thousand unpaid workers.

The company have announced they intend to provide 1,400 ‘placements’ for young people in a huge extension of their workfare scheme which has already seen over a thousand people work without pay for the company.

They claim this scheme is to help people find work – but only half of those who have been on the scheme have found jobs and not all of those were with M&S.  This is probably around the number who might have been expected to find jobs anyway.  Workfare has a terrible record in actually helping people find a real job and may even trap people in unemployment as the time available to job search disappears.

And it is this which should be pointed out to every young person who thinks that working unpaid for a supermarket or chain store will help then find work.  Some of the richest companies in the UK are colluding with the Government to trick those beginning their working lives into believing they should have to work for free first.

So entrenched has this become that Marks & Spencer are happy to boast that 2% of their work force is not paid. There was a time when companies paid their staff, even whilst they were being trained. Now they are attempting to offload this cost onto unemployed people and the tax payer,  and they think this is something to show off about!

Astonishingly this mass theft of people’s labour is presented as a wonderful opportunity for the people the company is exploiting.  It is certainly is a an opportunity for the greedy bosses at Marks & Spencer.  Unemployed people will be expected to work for a period of four weeks for up to 37 hours a week.  Even at minimum wage, this represents a whopping £1.3 million pound wage subsidy for the company – a subsidy being provided by some of the UK’s poorest people.

It is unclear whether this mass workfare scheme will be linked to formal Jobcentre workfare schemes such as the Work Programme or Work Experience.  After the workfare row blew up last year many companies pulled out of these programmes to launch their own versions of workfare instead – which they claim are entirely voluntary.

However under the present eligibility rules for Jobseekers Allowance, it is difficult to see how workfare can exist without some form of endorsement from the Jobcentre.  Claimants are now expected to spend 35 hours a week looking for work as a condition of claiming unemployment benefits.  Such is the draconian nature of the regime introduced by power crazed fool Iain Duncan Smith, unemployed people are no longer able to choose how and where they look for jobs.

If workfare at Marks and Spencer does not form part of Jobcentre agreed ‘work related activity’ then it is likely to affect a claimant’s eligibility for benefits.  And if it does, whilst it may not be formally mandatory, then young people who refuse this kind of workfare risk being sent on Mandatory Work Activity instead as the DWP takes revenge against those who refuse to work for free.  With claimants living in fear of soaring and punitive benefit sanctions – which can force people into utter destitution for up to three years – almost nothing is really voluntary for those signing on anymore.

Join the Week of Action Against Workfare from the 6th-14th July.