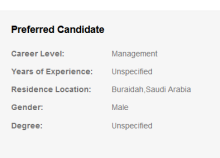 In Saudi Arabia – where Maximus operate welfare-to-work style schemes for the government – gay, lesbian and transgender people can face punishments ranging from flogging, to imprisonment and even execution.  Women are forbidden from carrying out many jobs, and workplaces operate under strict gender segregation.  The regime’s Saudization programme means that companies in the private sector who employ non-Saudi nationals may be charged a fee or even prohibited from carrying out government contracts.

Yet on their website Maximus Gulf claim to be an equal opportunity employer who recruit people without regard to “race, color, gender, age, religious beliefs, national origin, disability, sexual orientation”.  This is of course a lie, as this advertisement for a Business Manager with the company – asking for a male candidate and Saudi nationals only – clearly demonstrates.  It is not the only job vacancy with the company that appears to specify gender requirements, and this is hardly surprising since Maximus themselves quite happily operate a segregated workforce in the country.

Which shows just what a breath-taking fucking hypocrite their UK Marketing Director @mariodunn1 is when he tweets things like this:

It seems that Sue Marsh is not the only one prepared to throw away deeply held  principles when a big fat Maximus cheque lands on the doorstep.

Join the Day of Action against Maximus called by Disabled People Against Cuts on March 2nd. 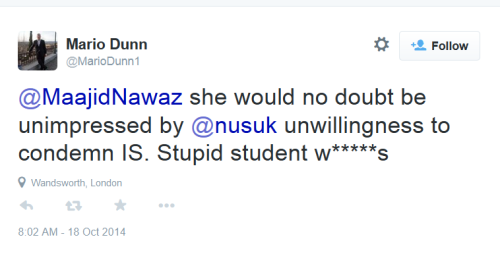 Believe it or not the above tweet referring to the NUS as student wankers was posted by Mario Dunn, the Communications & Marketing Director for Maximus – the company taking over from Atos to carry out the despised assessments for sickness and disability benefits.

Dunn is a former special advisor to the Labour Party who worked at the Department of Health between 2005-2010.  Now he is responsible for “all aspects of communications, stakeholder engagement, marketing and brand management” for Maximus but still has the time to have tantrums on twitter – usually in defence of the crimes of the Israeli government.  He is also passionate in his support of Tony Blair, calling a piece which mildy criticised the former Prime Minister ‘cretinous’.  His choice of language perhaps reveals the truth about attitudes towards disabled people at Maximus.

Dunn will be working with Bill Gunnyeon the former DWP chief medical adviser who it was revealed this week will also now be working for Maximus.  He will join former Atos medical director Professor Michael O’Donnell who joined Maximus last year and who previously worked for UNUM, the insurance company who boasted about ‘driving government thinking’ on reforms to sickness and disability benefits.

Maximus have claimed they will be different to Atos.  So far they look exactly the fucking same.

Join the Day of Action Against Maximus on March 2nd – please spread the word – facebook page now up.

Posted in DWP, ESA/Atos, Fighting Back