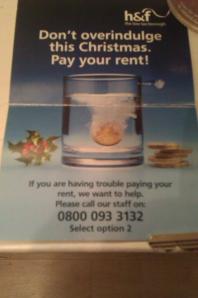 A flagship Tory council has caused outrage after sending out a Christmas card which appears to stereotype social housing tenants as feckless drinkers who will not pay their rent.

The card (pictured), sent by Hammersmith and Fulham Council, warns tenants not to over indulge at Christmas ending with a stark warning to ‘Pay Your Rent’.

Speaking to BBC London, local resident Tina Buckley said a card had even been sent out to her 81 year old mother who has been a tenant for 60 years and never been behind with her rent.  Slamming the council’s campaign Ms Buckley said the cards were a: “disgusting, threatening and insulting piece of literature masquerading as a Christmas greeting”.

This is not the first time that Hammersmith and Fulham have shown utter contempt for people living in social housing.  This is the council that wants to force some tenants to work unpaid or face eviction after all. Now even at Christmas there is no let up from the stream of vile propaganda aimed at those on low incomes or living in social housing.

And why the fuck shouldn’t we have a chance to over-indulge at Christmas if we want to.  Hammersmith and Fulham Council want to strip every last sliver of pleasure away from the lives of those with least.  Even a Christmas drink is unacceptable when there’s the Bedroom Tax to pay.

It is hard to imagine more affluent groups in society being treated this way.  The tax office are not hanging round the City of London warning yuppies not to snort so much coke this Christmas that they have to dodge their taxes again. Yet if you are poor then expect council busy-bodies to be watching over you constantly in case, just for a second, you manage to grab a little bit of happiness from life.

Talking of Christmas you can now support this blog by sending money.  Please don’t unless you can afford it.