Leeds City Council have teamed up with the police and so-called charities, to come up with the nastiest campaign yet aimed at discouraging the public from giving a bit of spare change to homeless people.

The above poster has been placed at key sites across the city warning people not to give money to beggars because it may help fuel their addictions.  As ever the homelessness industry demands that people give the money to them instead so they can spend it on drink soaked conferences in posh hotels that cost £700 quid a ticket.

No thought at all seems to have been given about how this campaign will further stigmatise homeless people who already often face abuse and even violence from some members of the public. Those attacks will now be more likely as homeless people are smeared as addicts or drunks by the very organisations that claim to be on their side.  The dehumanisation of the very poorest is no longer just coming from the pages of the right wing press.

The truth is that the homelessness industry’s own figures show that only around half of street homeless people have a drink or drug problem.  And even these people still need to eat.  All that campaigns like these achieve – if they are successful – is that homeless people who do have drug or alcohol dependencies are forced to beg for longer.  No-one is going to give up smack because some bunch of fucking idiots have put a few posters on the walls after all.  Meanwhile those forced to beg because their benefits have been sanctioned are left to go hungry.  But then this is just a lifestyle choice according to Leeds Labour Councillor Mark Dobson.

What people in poverty need is more money, however it comes   There is plenty of research which shows this.  Yet this research is repeatedly ignored, not just by politicians obsessed with cutting benefits, but also by charities whose bosses are currently doing very well out of poverty and homelessness.  To attempt to smear and impoverish one of the most marginalised groups in society with campaigns like this is bad enough.  To do it to further line the pockets of overpaid charity chief executives is beneath contempt.

This is far from the first initiative aimed at stopping the public helping homeless people directly, but it is one of the most of unpleasant.  Luckily it has been a dismal failure, with just £50 raised according to the justgiving website. The people of Leeds have shown they are better than this.  It’s time these organisations realise that if they continue to attack homeless people then they won’t see a fucking penny of our money.  Give a beggar a quid instead.  At least you know it won’t be spent on campaigns like this.

Posted in Housing and Homelessness, Poverty 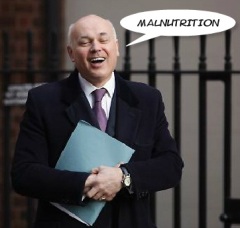 Cuts to social security, stagnating wages and high fuel bills have been blamed for a trebling of hospital admissions due to malnutrition in Leeds.

According to the Yorkshire Evening Post, 93 people needed hospital treatment for malnutrition in 2012, compared to just 30 in 2008. These tragic cases could represent the tip of the iceberg says Councillor Lisa Mulherin, warning that the number of hospital admissions: “tells us something about the changes to the welfare system, wage stagnation and the way fuel prices have gone up out of all proportion with people’s pay.”

A shocking 27,000 people across Leeds were estimated to be suffering from or at risk of clinical nutrition said health professionals in the city last year.

Appalling the situation is likely to become far worse as a wave of cuts to benefits begins to bite.  The Bedroom Tax is just a few months old and 9000 households in Leeds are estimated to be affected.  Changes to Council Tax Benefit mean claimants in the city will now have to pay a weekly sum out of their already meagre incomes.   The re-assessment of people on sickness benefits is still far from complete and many people are still to face having benefits slashed due to being found ‘fit for work’.  When reforms to Disability Living Allowance finally take hold around a fifth of disabled people are expected to lose this vital benefit.

A recent report by Citizens Advice found that 70% of claimants serving sanctions were forced to cut down on food, with some people reporting having to beg or go through bins to find something to eat.  For those with health conditions the situation is even more acute.  One person told Citizens Advice that during a sanction: “We couldn’t afford a meal each day so often didn’t eat for days on end. I suffer with hypoglycaemia and need to eat, so this left me with many black outs, confusion, incredibly weak and sick.”

According to callous Ministers in the DWP, this kind of desperate poverty will ‘incentivise’ people to find work.  Yet even if the Government’s manufactured unemployment figures are taken at face value, the miniscule rise in jobs has not been seen across the whole of the UK and certainly not in many northern cities like Leeds.  The number of unemployed people in Yorkshire rose by 4000 in the last three months.

Forcing unemployed people to the brink of starvation will not create a single job.  Yet still Iain Duncan Smith tries to foist the blame for poverty and unemployment onto the poor and unemployed.  Rarely has any modern Government shown such cruel indifference to the suffering of their poorest people.  That this kind of state-inflicted poverty is happening in one of the richest countries in the world should be a global scandal.