It is not just gay and lesbian people that are sinners in need of a cure according to the Evangelical Alliance – the extremist Christian group who boast Work and Pensions Secretary Stephen Crabb as one of the council members of their voluntary sector offshoot in Wales.  Transgender people are also targetted by the organisation.

In a report published in 2000 the group say they oppose the use of surgery as treatment for gender dysphoria and insist that an ‘authentic’ sex change is both impossible and incompatible with God’s will.  Mirroring their attitude towards lesbian and gay people, the Alliance say ‘transsexuals’ should be welcomed into the church, but that they ‘hope and anticipate’ that transgender Christians will accept the need to ‘re-orientate their lifestyle with God’s teachings’.  In return the church should offer ongoing care following ‘gender re-orientation’.

The report also endorses discrimination against transgender people in the workplace, claiming that in principle they oppose this, but in practice some circumstances may make the continuing position of a transsexual  ‘extremely difficult’ whether or not they were transitioning.

A later report on transsexuality was published by the Evangelical Alliance in 2006, in association with Parakaleo Ministeries.  This report is no longer available online, but a quote discussing Caitlin Jenner from Parakaleo ‘s website gives a hint of what to expect: “The sick national conspiracy to pretend that Bruce Jenner is a woman because he is mentally confused, has surgically mutilated his male body, and received plastic reconstruction surgery to give him a not entirely successful appearance as a woman, to the fanfare of the twisted leftwing elite.”  This is compassion, evangelical style.

More recently the Alliance published a glowing review of a book by Christian psychologist Mark Yarhouse discussing church responses to transsexuality.  Yarhouse believes one way of looking at gender dysphoria is as a “disability resulting from living in a fallen world”.  In a somewhat garbled rant he seems to say that cross gender identitity compromises the “sacred integrity of maleness or femaleness implicit in the body” and calls for transsexual people to be drawn into the ‘transformative’ power of Jesus Christ.

Yarhouse believes that through a “combination of holistic therapy and professional psychotherapy” those who are transgender will “accept their true selves as created by God”.  He calls for compassion during this process, saying if a transsexual person shares their name with him, then he will use it along with any desired pronouns, as an act of respect.

This is a bit much for the Evangelical Alliance who comment that some Christians might be nervous Yarhouse is making “too many concessions towards colluding with illusion and deception.”  They agree with the general argument though which is that transsexual people should be welcomed into the church and then cured.  Or in their words churches should point transsexuals to “the transformative work of Jesus Christ who created each individual and knows them from the moment of conception and is able to lead them to acceptance rather than rejection of their true selves – body, soul and spirit.”

The review of Yarhouse’s book was written by  Don Horrocks who also wrote the Evangelical Alliance’s Transexuality report in 2000.  Horrocks was Head of Public Affairs at the Evangelical Alliance until retiring recently.  Stephen Crabb sits on the Council of Reference of GWEINI, the voluntary sector offshoot controlled by the Evangelical Alliance.  It is inconceivable that he was unaware of the views of this organisation – they never shut up about LGBT people.  It was only once he got a top job, and decided he wanted to be Tory leader that he had a sudden conversion to LGBT equality.  He has never condemned his evangelical colleagues.  Were a senior minister linked to a group that promoted extremist racial or religious hatred then they would be gone from government office in seconds.  Crabb however has shrugged this off like it is nothing.  That says everything you need to know abut the true beliefs of not just Crabb, but also the party he seeks to lead. 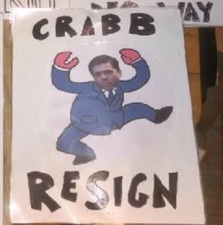 According to their website, Crabb sits on the Council of Reference of GWEINI, a group which claims to represent the Christian voluntary sector in Wales.  In reality however they appear to be a front group for the Evangelical Alliance who support gay cures in some cases and believe that sexually active gay and lesbian people – even those in committed relationships – should be subject to church dicipline.

The chairperson of GWEINI is Elfed Godding who is also the national director of Evangelical Alliance Wales with whom they share a phone number and address.  They operate under the same charity registration number as the UK wide Evangelical Alliance and explain on their website that GWEINI is “Evangelical Alliance Wales working with other Christian agencies in the nation.”  One of those agencies is CARE, the group that Stephen Crabb once enjoyed a “fantastic year” with as an intern and who in 2009 funded a ‘gay cure’ conference where amongst other things they discussed “mentoring the sexually broken”.  Joining Crabb on GWEINI’s Council of Reference is his old friend Lyndon Bowring, the Executive Chairman of CARE.

CARE have watered down their public opposition to gay and lesbian people recently, but you can’t say the same for the Evangelical Alliance .  In 2012 the they published a book called ‘Biblical and pastoral responses to homosexuality’ to address what they said was an urgent need for guidance on matters relating to sexuality.  To read it is like stepping back in time.  Whilst the Alliance offer sympathy to those that experience ‘same sex attraction’ they insist that any sexual activity between those of the same sex is a sin and incompatible with Christian life.

Instead lesbian and gay Christians should be supported to live chastely says the group and church leaders are encouraged to support ‘reparative therapy’ – meaning an attempt to cure them of homosexuality – for those that want it.  They say they “welcome and support … those who  offer counsel and pastoral support” to help gay and lesbian people live a “chaste life” claiming that part of this process may mean some “experience changes in the strength or direction of their same-sex attractions”.  According to the Alliance there is “plenty of anecdotal evidence” that gay and lesbian sexualities can be changed.

This doesn’t mean they are homophobic they inist, saying they welcome gay and lesbians into churches as long as they don’t ever have sex.  But they also warn that “habitual homoerotic sexual activity without repentance”, and those who promote it, should be diciplined by, or even kicked out of their churches.  And they mean it.  In 2012 they expelled a Oasis, an evangelical ministry who published a piece on their website arguing that monogamous same-sex relationships are not sinful.  They are still happy to work with Stephen Crabb though.

Crabb, who voted against gay marriage, has insisted that he does not support a gay cure.  Yet he is embedded within an evangelical movement who actively promote such practices and who make no secret of their opposition to LGBT people.  Will the real Stephen Crabb ever actually stand up?  Or perhaps, given the appalling bigots he is happy to be associated with, he should stand down.

If you have any doubts about where this group stands read the Evangelical Alliance’s 10 affirmations which they say summarises their position on lesbian and gay people.