New Work and Pensions Secretary Stephen Crabb may have air-brushed his relationship with Christian gay hate cult CARE from his website but they didn’t return the favour.  Crabb’s glowing endorsement of the organisation is still proudly featured on their graduates page despite the 2012 scandal when MPs distanced themselves from the group after their involvement in a gay cure conference was revealed.

CARE, or to use their full name Christian Action Research and Education, helped to fund the Sex in the City conference in 2009 along with evangelical group Mainstream Anglican who still offer a run down of conference which included  discussions on “mentoring the sexually broken” and gay cure therapies. 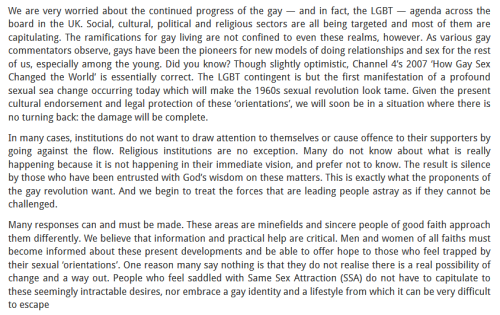 This was not the first gay hate event funded by CARE.  They also sponsored a conference in 2007 which asked the question “The Time for Truth, Is Gay Real?”.  Which is a bit rich coming from people who worship an invisible man who lives in the sky.

As well as being a graduate of the CARE internship scheme Crabb also hired a CARE intern himself in 2008.  When he was eventually confronted about his relationship with CARE in 2012 he refused to condemn them.  He cannot say that he is unaware of the beliefs of this group he so avidly supports.

According to the Daily Telegraph, the aim of Care is to “build a new generation of committed Christian politicians.”  Crabb’s devotion to the cause was evident in 2008 when he was one of a handful of MPs who signed an amendment to proposed laws criminalising incitement to hatred on the grounds of sexuality. The amendment said nothing should prohibit or restrict “discussion of, criticism of, or expression of antipathy towards conduct relating to a particular sexual orientation, or urging persons of a particular sexual orientation to refrain from or modify conduct according to that orientation”.

So Crabb does not just have a lifetime relationship with an organisation who believe that LGBT people can, and should be cured.  He does not just give them a glowing endorsement on their website.  He has also acted in his role as an MP to ensure they have the right to continue to spread their gay cure agenda.

In his role as head of the DWP, Stephen Crabb is now responsible for millions of people, including those going through great difficulties.  Young LGBT people forced to leave the family home for example, or facing discrimination in the workplace.  How can they be expected to trust Crabb when he is so cosy with an organisation that appears to want gay people wiped off the planet?  He may have only been in the job two minutes, but if this government really means what they say about LGBT equality then Crabb must go, now.