This Is What Democracy Looks Like: Iain Duncan Smith Election Challenger Arrested Over Alleged Sticker 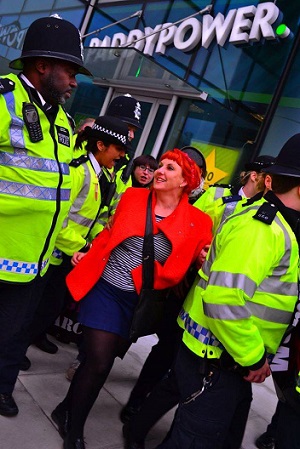 Lisa McKenzie, who is standing for Class War  against Iain Duncan Smith in Chingford, was arrested last night in the latest petty police attack on the group’s election campaign.

Lisa was accused of putting a small sticker on a wall two weeks previously and thrown into the back of a van, hand-cuffed and held for hours.  She has been charged with criminal damage. The arrest took place at last night’s Poor Doors demonstration, the weekly picket of the luxury tower block in Aldgate where tenants in social housing are forced to use a different door to the rich.  According to one onlooker police insisted her arrest was nothing to do with the election campaign against Iain Duncan Smith.  They must think we are fucking idiots.

When Lisa and Class War recently went on the campaign trail in Chingford they were followed by police, repeatedly harassed and threatened with arrest.  Class War candidate for Croydon South, Jon Bigger, was recently followed around the constituency by up to a dozen coppers just for handing out leaflets.

At previous Poor Doors protests police arrested high profile Class War supporter Jane Nicholl, threatening her with ludicrous arson charges after somebody allegedly burnt a small effigy of Boris Johnson.  At a later demonstration police seized a Class War banner they said had a rude word on it and arrested the person holding it.  One of Class War’s founders, Ian Bone, has also been arrested at the protests for equally trivial reasons.

Both the Poor Door’s protests and Class War’s election campaign have been boisterous, but peaceful.   The only violence has come from jumped up twats in uniform doing the bidding of the likes of Iain Duncan Smith. This is what fucking democracy looks like when working class people use their system to fight for our interests.  Petty arrests, police violence, censorship and harassment replace televised debates and election hustings.  Class War’s slogan ‘by the brick or the ballot paper’ has never seemed more apt.  The bastards will come for you whichever you choose if they don’t like what you say.

Lisa Mckenzie, who was recently described as the living embodiment of class hatred by former Daily Mail columnist Melanie Phillips, has vowed this arrest will not silence her.  Following her release she said “if they want to shut me up they will have to kill me”.

Visit Class War’s website for the latest news on the campaign: http://www.classwarparty.org.uk/ 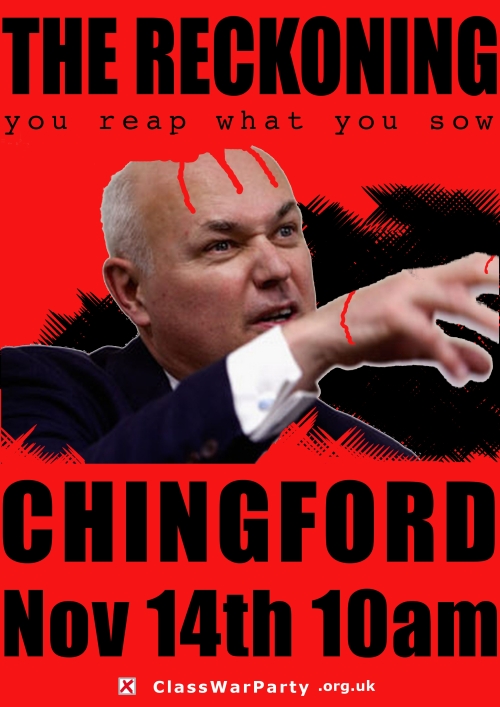 Iain Duncan Smith is hosting a Jobs Fair at Chingford Assembly Hall, Station Road, Chingford, E4 this Friday November 14th.  Class War will be welcoming him from 10am and are planing to make a day of it.  Speakers including the future Chingford MP Marina Pepper, – the local Class War candidate – along with John McArdle from the Black Triangle campaign are expected to speak at noon.  Expect vengeance.  Please spread the word and help make this big.