Poverty pimps Atos Origin are currently in negotiation with Carer Watch, the forum forced offline by bullying legal threats.  Atos claim they used legal threats only to “request that the libellous content relating to Atos Healthcare and our employees be taken down in order to protect the reputation of our employees and company against the false and malicious allegations that were posted.”

So far it is unclear what those false and malicious allegations were.  Atos have also forced at least two other websites offline with legal threats.  In particular they have complained about their precious logo being misappropriated and the phrase Atos Kills.  They also objected to the name of the Atos Register of Shame website, a clear case of ‘fair comment’  under libel laws.  It seems that Atos care as little about the law as the disabled and sick people they harass.

All this is taking place during a huge rebranding exercise for the Atos Corporation.   Despite being harangued and hounded from both facebook and twitter they are back with a new facebook page at: http://www.facebook.com/Atos?sk=wall whilst they appear to be using the hashtag #atosblog on twitter.  They also have a brand new logo and as ever the internet has been quick to help.  Two latest suggestions on how to promote a more honest corporate identity come from The New Republic: 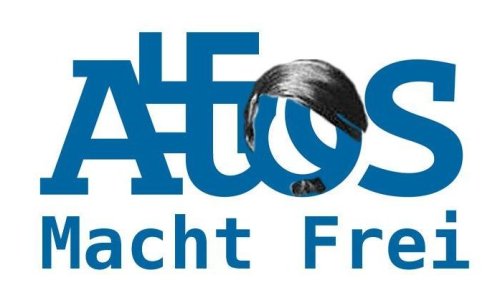 Other designs up for consideration feature on an earlier post.

If you have a blog or website please republish these pictures and come up with your own.  Let’s show the bastards at Atos we won’t be silenced by their threats!

A National Day of Action Against Atos has been called for September 30th.

Atos Origin, the IT company responsible for carrying out the notorious Work Capability Assessment have taken their harassment of the sick and disabled a step further by issuing legal threats to a website which was critical of them.

Afteratos.com is a website set up two months ago by a lone disabled woman (who wishes to remain anonymous and goes by the name of Aunty Admin).  It’s purpose was to document and survey reports of those on sickness or disability benefits who have been subjected to Atos ‘ computer based medical assessments.

Thousands of people have been stripped of benefits having failed the Atos test, with 40% (and up to 70% with representation) having benefits restored after appeal.    Tragically some people have committed suicide after learning of Atos Origin’s decision, whilst the stress of the testing procedure has also been blamed for at least one death according to a national newspaper.

This hasn’t stopped Atos from threatening afteratos with libel action, amongst other things over their use of the phrase Atos Kills, and Atos Healthscare.  They also objected to the image below, which has appeared on countless websites (and no doubt now countless more), as a breach of their copyright.

Despite the aforementioned newspaper article, and the cartoon at the top of the page which first appeared in The Guardian, Atos Origin have decided to try and bully the disabled people and groups who have had the courage to stand up to them. The full letter threatening legal action can be read at (pdf):  http://afteratos.org/wp-content/uploads/2011/05/Cease-and-Desist-Letter.pdf

Whilst afteratos.com have made some concessions, they have warned that any further attempt to silence them will be vigourously defended in court.

Atos Origin have been the target of protests around the UK  by disabled people, benefit claimants and supporters.  Activists have vowed to continue the fight until these distressing and shameful attacks on claimants  are brought to an end.