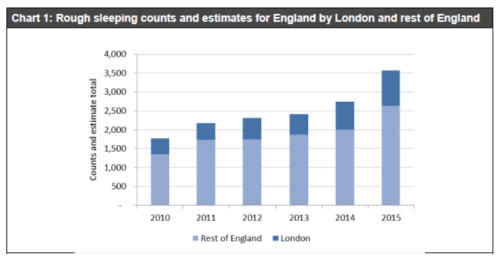 The number of people sleeping on the streets has soared by 30% in just one year figures from the Department of Community and Local Government reveal today.

A total of 3,569 people were found to be sleeping rough in Autumn 2015 –  the highest number since records began for the second year running.  The shocking figures come after five years of cuts to vital housing benefits combined with vicious welfare reforms that have left many destitute due to punitive benefit sanctions.  The number of people forced onto the streets because they cannot find a home has more than doubled since reforms began in 2010.

Tory politicians have brushed off the problem of rough sleeping claiming they are all just immigrants from Eastern Europe nnd so don’t matter.  Figures produced by charities show that only a third of rough sleepers come from the recently admitted EU countries however and that street homelessness is rising amongst all nationalities.

Today’s figures are just a snapshot and are taken from a combination of street counts – where outreach workers go out and physically record the number of people they see bedding down – and estimates by local authorities in areas where the problem is not so acute.  Homelessness industry insiders have long warned that the problem is woefully under-estimated and even raised fears that police usher people away from common street sleeping sites before counts are due to take place.  Today’s figures are horrifying enough but the sad truth is they only tell half the story.

The response from the government towards the growing homelessness epidemic has been more cuts with another benefit cap on the way likely to put 120,000 homes at risk.  This, combined with freezes on Housing Benefit rises despite soaring rents and the willful destruction of social housing in the UK, mean that street homelessness is a problem likely to become much worse.

This entry was posted in Housing and Homelessness, Welfare Reform and tagged Rough sleeping, Street Homelessness. Bookmark the permalink.