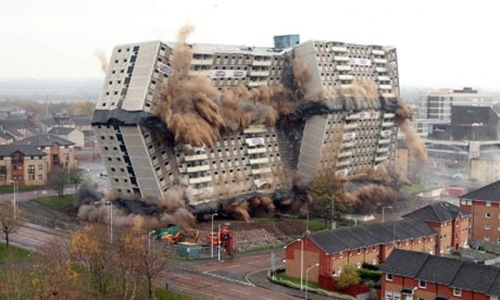 The destruction of social housing will not happen overnight, although it is likely to be largely gone within a generation or so.  Tenants with serious health conditions or those over pensionable age are probably safe for now as long as they die quickly enough.  When they do, and their properties become empty, then new legislation means the most expensive will be sold off.  Alongside increased Right To Buy sales, this will see the number of social houses available plummet – potentially by as much as 95% in one Central London borough.  Meanwhile fixed term tenancies will ensure that anyone who gets a council house is less likely to keep it for life meaning the flow of houses for potential sale is now embedded within the system.

But even these measures are not enough to ensure that the end of social housing happens as quickly as possible.  Something also needs to be done to lock the next generation out of socially managed homes.  So in last month’s Autumn statement George Osborne quietly slashed Housing Benefits for those under 35 who are eligible for social housing.

The Shared Accommodation Rate was first introduced by Labour who casually decided that anybody under 25 in private rented housing should only receive enough Housing Benefit to pay for a room in a shared house.  This was later extended by the Tories to all those under 35 with completely predictable results.  An early evaluation of how landlords were likely to respond to the move discovered that many were introducing policies of not letting to anybody under 35 at all –  whether in work or not – due to fears they would be unable to meet the rent if they became unemployed or took a pay cut.  Despite this shocking report, the cut went ahead as planned and no further evaluations have been carried out.  Street homelessness has risen to record levels since the policy was introduced.

In a savage and strategic move, George Osborne is now extending the Shared Accommodation Rate to the social housing sector* and the results will be devastating for those under 35.  The Shared Accommodation Rate in Sunderland is just £45 a week.  That is the most that a single person under 35 and without children can claim in Housing Benefits in the region.  In Outer East London it is £73.62, whilst in Birmingham it is just £56.77.

The average ‘social rent’ for a one bedroomed council or housing association flat in England is £76 a week. These kind of rents are being phased out however and replaced by so-called affordable rents, which on average cost £117 a week – far above the amount soon to be available in Housing Benefits for younger claimants.  This means it will not just be the private rented sector that under 35s on a low income are excluded from, but social housing as well.

This drastic cut means that three scenarios are possible.  The first is that council and housing associations could cut rents for those under 35.  This is not likely to happen.  Social housing rents are largely controlled by legislation and the recent 1% cut will not come close to making up the shortfall.

Another option is that social housing providers will attempt to bring rents down by splitting up larger properties amongst several young people – or that they will turn to the private sector to provide shared accommodation for young people in housing need.  The problem with this is that many of those under 35 who are eligible for help with housing are care leavers, people with mental health conditions, or those who have been through the hostel or women’s refuge system.  Often, though not always, these are people who have had difficult lives.  Shared accommodation is unlikely to be suitable for a young victims of abuse leaving care, domestic violence survivors or former rough sleepers. And few private sector landlords will be happy renting to gangs of young marginalised people, some of whom may display what social workers like to call ‘challenging behaviour’.

The third option is that these groups will be placed in temporary or supported housing, forever.  Or at least until they are 35.  This will be hugely expensive, but Osborne might even have that covered.  According to the charity Homeless Link the shared accommodation rate will also apply to those in supported housing such as women’s refuge’s or hostels for the homeless.  Rents in these kinds of accommodation are eye-wateringly high to pay for support staff, with the cost of this currently met by Housing Benefit.  If this benefit is cut then anywhere providing supported or temporary housing for those under 35 will close.

Homeless Link report that the government claim they will avoid this by exempting supported housing from the cut using Discretionary Housing Payments.  This is the sticking-plaster money given to local authorities in an effort to alleviate the worst of the homelessness caused by government policies.  The key word is discretionary – local councils are under no obligation to spend a penny of this money. Without legislation to ensure these payments go towards supported housing then any Tory council that decides they want to close every homeless person’s hostel or women’s refuge in their region will be able to do so at the stroke of a pen.

Of course there is also a fourth option, which is that young people will simply be left to fend for themselves.  This will mean the most troubled and alienated young (and not so young) locked out of housing completely or forced to remain in an abusive family environment or relationship.  Or left to freeze on the streets.  Perhaps George Osborne thinks they might as well get used to it.  Because with social housing being made both unworkable and unaffordable then a lifetime of homelessness and desperate housing insecurity threatens the next generation like never before.

*The Shared Accommodation Rate will only apply to those under 35 without children who sign a tenancy after April 2016 and the cut will then not be implemented until April 2018.  It will not apply to existing tenants.