This Is Fucking Vandalism, London’s History And Culture Are Being Destroyed In The Name Of Greed

Around 150 people joined a protest outside The Black Cap public house in Camden yesterday after it closed suddenly and without warning last week.  The long running LGBT venue opened in the 1960s, surviving throughout the days when gay people faced prosecution.  Now it is falling victim to rampant gentrification that respects neither culture or history and seeks only to make as much money as possible for greedy property developers.

Speaking at the protest drag artist Titti La Camp, a former performer at the pub, said 10 gay venues had closed in central London since the current Tory government weren’t elected.  In an all too familiar story, those trying to save The Black Cap believe it is likely to be converted into yet more luxury flats that nobody local can afford.

A few hundred yards away a large part of Camden Market is currently a building site, awaiting being converted into a soulless offices along with 170 new homes of which only 17 will be affordable.  The company behind the development is owned by billionaire Teddy Sagi, the man behind the explosion of fixed-odds betting terminals in bookies which have been called the crack cocaine of the gambling world.  Sagi’s company also owns Stables Market in Camden and several other local sites which are earmarked for development.

Down the road in Berwick Street, Soho, a new development has led to the end of many long running local businesses like That’s Andy’s hardware shop which had existed for 20 years.  Many more shops lie empty after being forced to close.

This is Walker’s Court at the end of Berwick Street.  This narrow passageway  was often photographed as an iconic example of Soho’s historic association with sex work.  Now it is boarded up and awaiting development by Soho Estates, the company founded by the late Paul Raymond who made millions out of Soho’s sex trade.  His grand-daughter, one of the UK’s richest women who sits on the board of Soho Estates, is now set to make millions out of the destruction of Soho’s sex work industry.

Just around the corner from Walker’s Court the famous Madame Jojo’s cabaret and burlesque venue was closed down at the end of last year.  The club was stripped of its licence after an alleged violent incident took place involving the club’s bouncers.  Madame Jojo’s had replaced both the management and security team after the incident but this was not enough to satisfy Westminster Council.  Those who used and loved the venue believe the real reason it was closed was the Council’s desire to gentrify the area. 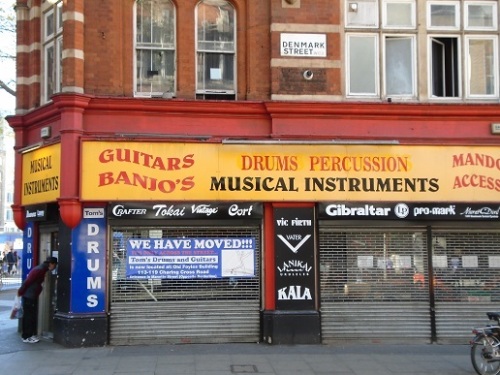 Less than 10 minutes walk away lies Denmark Street, better known as Tin Pan Alley, once the heart of the UK’s music industry and still a living, breathing community of musicians. Now it is being redeveloped into a “super-flexible, digitally-enabled streetscape” with posh flats, hotels, gigantic advertising boards, a ‘sky bar’ and a new piazza.  The developers call it a run down corner of London.  They should come to fucking Catford.  Actually they shouldn’t, cunts like them are already coming to Catford.  Some of the music shops have moved out of Denmark Street already.

These signs appear on the empty properties along Denmark Street after Bohemians 4 Soho squatted the 12 Bar Club in a last ditch effort to save the famous music venue from closure.  An army of bailiffs and security guards are now stationed in Central London protecting the property of the rich from the people who live here.

This is what is replacing these much loved venues and famous landmarks.  These loft apartments are on the former site of St Martin’s Art school, now re-located to King’s Cross.  A two bedroom flat in this building will cost you £4.5 million.  Of course it’s not just posh flats that are replacing our homes and community venues.

London does not have a housing problem it has a rich people problem.  The decimation of Soho and Camden is just one side of it.  The other is the tragic evictions taking place everywhere from Barnet to Brixton and the record numbers of people sleeping on London’s streets.

Nobody wants this vandalism except for the grasping property developers, greedy landlords and global super rich who are turning every last brick in the city into an investment opportunity. They could not give a fuck about the people who live here – the people who built London and do the real work that makes it function.  This is not a natural development of the city due to changing fashions and demographics.  It is certainly not regeneration.  It is a robbery.  A city being reconstructed as Disneyland, where no real people can afford to live.  It will be the death of London in the end.  And the rich won’t care, they will be busy destroying somewhere else by then.

But there are fucking loads more of us than them.  Struggles over housing and community venues are bursting into life everywhere.  London has a long tradition of subversion, disobedience, rebellion and riots.  The London mob must rise again.  All of us, together, against the fucking rich.

The fight to save the Black Cap is not over, visit their facebook page.

Join the mass action against property developers at the vile Property Awards being held at the Grosvenor Hotel on Park Lane this Tuesday 21st April, full details on facebook.

Reclaim Brixton is taking place on Saturday 25th April, for a run down of what’s taking place visit: http://www.brixtonbuzz.com/2015/04/reclaim-brixton-event-on-sat-25th-april-times-places-and-meet-up-points/

120 responses to “This Is Fucking Vandalism, London’s History And Culture Are Being Destroyed In The Name Of Greed”