How The DWP Bribed Employers To Break Age Discrimination Laws With A ‘Golden Ticket’ Worth £2,275 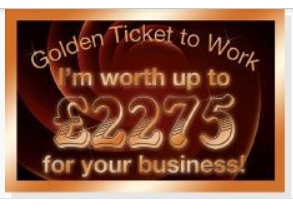 Jobcentres bribed employers with ‘golden tickets’ worth up to £2,275 to hire young people over older workers despite warnings from lawyers that this Wage Incentive scheme was probably illegal.

Figures released this week show that over one hundred thousand ‘Wage Incentive’ payments were doled out to employers before the scheme was quietly abandoned last Summer.  These payments could be claimed from the DWP every time an employer recruited someone under 25 who had previously been on benefits.  An early evaluation of the scheme found that it was riddled with abuse, with employers making backdated claims for workers they had already hired, or even using Wage Incentives as a tax-payer funded rolling stock of temporary staff.  This report came alongside warning from the DWP’s own lawyers that companies who took these payments faced the risk of legal challenges under age discrimination laws from older workers denied jobs .

Despite these warnings Wage Incentives continued and by the time a second evaluation was published all mention of employers abusing the scheme had magically disappeared.  What this evaluation found however was the huge amount of pressure Jobcentre staff were being placed under to encourage employers to hire younger workers and claim Wage Incentives.  According to the report some staff felt that older claimants were disadvantaged by ‘persistent pressure’ to concentrate on Wage Incentive jobs and that targets set by the DWP were unfair.

Both evaluations found that ‘self-marketing’ Wage Incentives proved one of the most effective ways to sell the scheme to employers.  This included encouraging young people to add details of the potential bribe to their CVs, mention it at interviews, or present employers with a shoddily designed ‘golden ticket’ like the one pictured above.  According to one Jobcentre worker: “The line from employers is usually – if I see two candidates exactly the same and one is eligible and one is not, I’ll take the wage incentive candidate.”

In other words employers would hire a younger worker over an older one purely because they were paid by the government to do so.  It is clear that this discriminates against older workers and it seems likely this is one of the reasons why Wage Incentives were quietly scrapped in August last year.

Amusingly the DWP are now pretending that Wage Incentives were only ever intended as a “temporary measure to encourage employers to offer sustained paid employment to young people during the recession”.  This is transparent bollocks.   There was never any intention that this scheme was temporary and it was introduced and stayed in effect long after the official period of recession.

The truth is that Wage Incentives were unfair, ineffective, hugely expensive and probably illegal.  But that’s all just business as usual at the DWP and not usually enough to cause one of Iain Duncan Smith’s crazy schemes to be brought to an end.  Yet significantly, even many grasping employers found Wage Incentives too much to stomach.  According to the recent evaluation one Jobcentre said:  “Some of our large and national employers won’t take wage incentive on because they don’t want bad or adverse publicity, if they think it looks like a bribe.”

Astonishingly the report says that in “one or two extreme cases, larger employers … were so opposed to the wage incentive that they would consider only recruiting candidates aged 25 and over” adding that “Other employers have said ‘it’s unethical, we don’t want to know about it”.

Don’t believe the fucking hype, employers have not suddenly turned into a bunch of hippies, they are just worried about their reputations.  If anything this shows the success that groups such as Boycott Workfare and claimants themselves have had in exposing the exploitation and naked profiteering at the heart of DWP backed schemes.  Everything the DWP try and do is toxic now.  Let’s make sure it stays that way.

116 responses to “How The DWP Bribed Employers To Break Age Discrimination Laws With A ‘Golden Ticket’ Worth £2,275”