Take part in the Boycott Workfare week of action! 4-12 October 2014 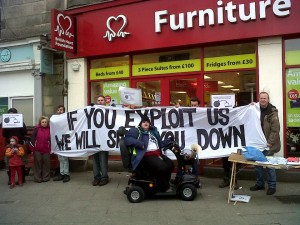 Forcing people to work for free through the threat of removing people’s benefits (sanctions) is unfair, unjust and wrong. In the week of action, tell the companies and charities who are profiting from this exploitative regime what you think of their involvement! Email, Tweet, use Facebook, phone them, protest, organise a flashmob: for a week of piling the pressure on workfare exploiters.

We know these tactics work! Just look at how quickly Byteback IT had to pull out when you told them what you thought after George Osborne made the mistake of visiting them. This is just one of the latest in a whole list of businesses and charities that have also pulled out of workfare following our pressure.

The latest workfare scheme, “Community Work Placements” (CWP), forces people to work for nothing for up to six months – twice the length of the maximum community service sentence for committing a crime. But there is growing resistance from the voluntary sector which the scheme needs to work: over 400 charities have signed up to Keep Volunteering Voluntary and 22 councils have pledged to boycott workfare. They know that workfare does not help people find jobs and being
unemployed is not a crime.

Resistance is paying off: the launch of the CWP scheme was massively delayed. Instead of using ‘big name’ national charities, the DWP has had to resort to small local charities and businesses to provide these Workfare placements. So local actions are all the more important! See Boycott Workfare’s list of Workfare users to find one near you.

All this means it is getting harder and harder for the government to find new employers willing to risk taking on Workfare placements. In fact the government is desperately doing all it can to avoid revealing the organisations using Workfare out of fear the schemes will collapse!

People pressure has ended Workfare in the place where it all started – New York – now let’s end it here!

Workfare undermines real paid jobs and wages; results in sanctions for thousands; does nothing to improve the chances of finding a job; and exploits those forced to take up these placements. Our actions can stop companies, charities and councils from exploiting this forced unpaid work. Wherever you are, however you can contribute, take action on 4-12 October.

Whatever you’re planning – let us know and we’ll help spread the word!

Join our Facebook event here which we will update with links to all the local actions.

This entry was posted in DWP, Fighting Back, JSA/Workfare/Work Programme and tagged boycott workfare, Community \Work Placements. Bookmark the permalink.