The Unemployment Timebomb At The Heart Of Universal Credit 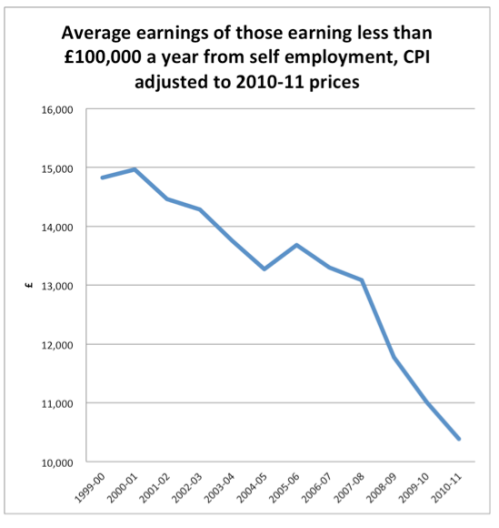 Iain Duncan Smith’s response this week to soaring low paid self-employment shows he remains as clueless as ever about what is really going on in the jobs market.

According to IDS, figures showing that the number of self-employed workers has jumped by 600,000 is a sign of “entrepreneurial spirit” and proves that his bungled and reckless policies are working. What is really going on is very different and lays the foundation for an unemployment time bomb at the heart of Universal Credit.

Some of the rise in self-employment is almost certainly down to falling living standards.  People who have taken early retirement are  setting up small businesses in an effort to pay soaring bills, along with so-called mumpreneurs – parents forced out of the workplace due to huge childcare costs and shit wages. The rise of the internet has also allowed some of those who are unemployed to generate a small income from self-employment, such as an ebay shop, or by carrying out small amounts of paid work online through micro-job sites.  Many companies use flaky self-employment contracts for sporadic or casual work to help them dodge minimum wage laws, or providing other benefits such as holiday pay.  These are some of the reasons self-employment is soaring, but of these precarious workers are really making much money.

Alongside this Jobcentre staff and Welfare-to-work companies are known to have encouraged unemployed people to claim Working Tax Credits and set up as self-employed, even if there is little chance of them earning a livable income. This gets them off the unemployment figures and onto a lower rate of benefits, although it may be a risky move for the claimant.  A claim for Working Tax Credits demands that those without children spend  30 hours a week working as part of their self-employment.  If they are unable to prove this then at some point the Tax Office may decide to take back the money that the DWP advised them to claim.

£10,400 a year works out at £200 a week –  less than somebody working 35 hours a week on the current minimum wage would earn. That means that many, if not most, of these workers will be unable to claim the upcoming (stop laughing) Universal Credit as self-employed earners.

When Universal Credit is fully introduced, only those earning the equivalent of a full time minimum wage salary will be eligible for self-employment part of the new benefit which replaces Working Tax Credits, Child Tax Credits and Housing Benefit.

Claimants will be given a year to achieve these earnings – although first they will have to pass the planned Jobcentre Dragon’s Den assessment to prove their self-employment is financially viable. If after 12 months they are not hitting the required earnings they will see benefits slashed as they will be assumed to be earning the full-time minimum wage when their claim is calculated.  Many will be forced to forsake self-employment at this point, and some will be told to do so by the Jobcentre.  Instead they will become ‘unemployed’ and expected to spend 35 hours a week carrying out ‘work related activity’ such as attending endless courses on how to write a CV or even full time workfare. They may even have to give up the work they are doing which makes them a small income because – astonishingly –  Jobcentre busy-bodies will have the power to sentence claimants to unpaid work instead of allowing them to carry out paid work on a self-employed basis.

Iain Duncan Smith may have convinced himself he has created a new spirit of entrepreneurship, but seems to have forgotten that even if this were true – and it isn’t – he plans to kill it stone dead.  And then all those self-employed workers will suddenly be back on the dole, and we will see the true extent of unemployment in the UK.

Above graph from the Tax Research report on plummeting earnings for the self-employed.