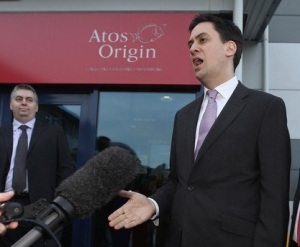 What they said then …

Labour will: “increase support for claimants to return to work, replacing the old one-size-fits-all model, which writes people off as completely incapable of work, with a tailored, active system that addresses each individual’s capacity”

A new deal for welfare: Empowering people to work (PDF) – The Green Paper which proposed the Work Capability Assessment in 2006

“We want the assessment to be part of the process of ensuring disabled people who can work get the support they need to do so, not to threaten or punish them. The test should be a gateway to identifying and assembling that support.”

“We will work with health professionals, personal advisers and disability groups (including the Disability Rights Commission and the Disability Employment Advisory Committee) to ensure that the transformed assessment process is fair and equitable in application and operation.”

“It will never be reasonable to expect some people to plan for a return to work or to impose the responsibilities and conditionality associated with this on them.  These people – who have the most severe health conditions and disabilities – will receive the new benefit without any conditionality, and at a higher rate”

“We also recognise not everyone can work and we’re committed to ensuring the support’s in place for those who can’t.”

The Work Capability Assessment was designed by Labour to strip sickness and disability benefits from one million claimants. There has been no announcement that this policy aim has changed. More people are placed in the Support Group now (meaning they are not expected to look for work) than they were under Labour. Whilst the Tories and Atos are currently at war, Atos have sponsored events at the Labour Party Conference in the past.

The Labour front bench have been silent about the introduction of Personal Independence Payments – designed to strip disability benefits from a fifth of disabled people. They have not spoken a word about the heartless closure of the Independent Living Fund. They voted for Iain Duncan Smith’s backdated legislation to steal hundreds of thousands of pounds from claimants by denying them compensation for illegally sanctioned benefit claims. They support unpaid work – even when the schemes are almost certainly illegal under minimum wage laws. Labour’s Job Guarantee is just workfare plus a sandwich which in practice could be more exploitative than current workfare programmes.

They have not changed. They will not change. When not pretending to give a shit about disabled people Rachel Reeves has boasted – boasted – that she would be tougher on welfare than Iain Duncan Smith. Most of the Labour front bench are chinless posh twats just like the braying toffs they pretend to oppose. They are on the side of bosses and billionaires, not us.  Do not fucking trust them.

236 responses to “What Labour Said Then, What Labour Say Now And Why They Can’t Be Trusted On The Work Capability Assessment”