Who The Fuck Does Esther McVey Think She Is? 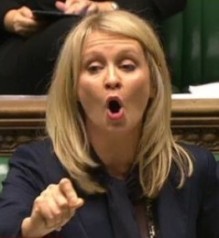 Newly unemployed people are to be treated as benefit scroungers from the first day of their claim the Minister for Unemployment Esther Mcvey announced today.

In a breath-takingly patronising statement McVey rants that from the end of the month newly unemployed people will be forced to show “they are taking their search for work seriously” before becoming eligible for Jobseeker’s Allowance.  This will mean producing a CV and signing up for the shambolic Universal Jobmatch – the Government job search site that is a laughing stock amongst claimants, employers and recruitment professionals alike.

This will be treating those recently made redundant  as ‘adults’ according to the minister, who clearly thinks that unemployed people are children.  Those facing these new measures will include people who have worked for years, unlike pampered posh girl McVey who bummed around in her Dad’s company for a while before launching a less than memorable television career.  Yet here she is lecturing people who’ve recently had real jobs about how to make themselves ‘prepared and enthusiastic’ to avoid the ‘one way street to benefits’.

The changes are being introduced despite the Government’s own statistics showing that 75% of people on Jobseeker’s Allowance are back in work within six months.  In contrast the number of people who have been unemployed over one year currently stands at 828,000, up from 757,000 in May 2010 when this Government weren’t elected – and this figure was the highest since May 1997.

With long-term unemployment soaring, and the Work Programme seemingly making things worse, the DWP are turning their attention to those who have just lost their jobs in a shoddy attempt to grab the headlines.  Once there was a time when governments pretended to care about people who had been made redundant.  Now they are more interested in smearing them as potential scroungers and forcing them into demeaning interrogations with Jobcentre busy-bodies in case they are secretly feckless.

This is what this Government really thinks of so-called hard working people.  Get laid off, for any reason, and you are instantly transformed into benefit scum in the eyes of Esther McVey.

This entry was posted in DWP, JSA/Workfare/Work Programme, Welfare Reform. Bookmark the permalink.

180 responses to “Who The Fuck Does Esther McVey Think She Is?”