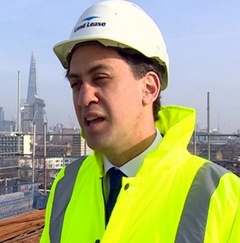 Ed Miliband pretended he has a real job as he announced his latest forced labour scheme.

Labour’s workfare plus a sandwich scheme is no better than the Tory’s current workfare and is every bit as badly thought out.

Labour’s Compulsory Jobs Guarantee takes the worst elements of almost all previous welfare-to-work style schemes and has rolled them all into one giant and hugely expensive fuck up. Possibly hundreds of thousands of people are to be forced to work in part-time temporary jobs with wages pegged at the minimum wage or face their benefits will be stopped.

Many people in these compulsory jobs may find themselves worse off then someone on current Tory workfare schemes.  The jobs will only be for 25 hours a week, meaning those over 21 will receive just £156.70 under current rates.  For the vast majority of claimants, who have rent to pay, this is likely to leave them between £20-30 a week better off than being on the dole.  The problem is that going to work everyday costs money.  In London the cheapest weekly travelcard costs over £30 a week.  Those on workfare at present have travel expenses met by the placement providers or welfare-to-work companies who run the schemes.  If travel expenses are not met for participants on the Jobs Guarantee, then many people will find themselves worse off than those currently on Tory workfare.  If these costs are met then the Jobs Guarantee will cost a lot more than the £5 billion that Ed Balls is claiming.

The problems do not end there.  Since those on the Future Jobs Fund will no longer be classed as unemployed – handily for the Government – they may also lose eligibility for Council Tax Support.  This is Iain Duncan Smith’s bungled scheme which replaced Council Tax Benefit, handing control over to local authorities to help the poorest pay local taxes.  The predictable result has been a postcode lottery and as the Public Accounts Committee today reported, has made many people in work worse off than they would be on benefits.  This will apply to many in Compulsory Jobs, who may no longer be eligible for Council Tax Support due to being officially employed.  This could also cut the incomes of people on the scheme to around the same weekly pittance as those forced to undertake unpaid work by the Tories.

Just like on the New Deal – Tony Blair’s bodged plan to cure youth unemployment –  those in a compulsory job will also face mandatory training for 10 hours a week.  It is unclear how this will work in practice, although a Labour Press Release seems to suggest this will merely mean employers are handed £500 on top of their free workers to provide this training.  It seems likely that people with Compulsory Jobs will find themselves working these ten hours without wages under the guise of it being ‘work experience’.  This will mean participants on the scheme working five hours a week more than those on current workfare.

On the Politics Show yesterday, the Shadow Employment Minister Stephen Timms, admitted that the cost of the Jobs Guarantee may mean that other previously announced initiatives, such as building more low cost homes, may not be included in the party’s next manifesto.  Labour would rather spend money forcing people to work on poverty pay than in solving the housing crisis – the real reason for the spiralling benefit bill and the cause of huge suffering for both the young and old alike.

It says everything about the modern Forced Labour Party that the best they can come up with is a scheme which sounds mildly better than workfare – but in practice is likely to be more exploitative.  In the worst case scenarios people in Compulsory Jobs will be forced to work longer for less money in their pockets than people currently on workfare.  The sad truth is that this scheme is all spin – a shoddy attempt by Labour to show that they will be tougher on benefits than Iain Duncan Smith.

With brutal benefit sanctions behind this scheme, unemployed people will be plunged into desperate poverty if they refuse a Compulsory Job and face grotesque exploitation if they agree.  The end result will be the undermining of wages and working conditions for all low paid workers as an army of un-unionised and poverty paid forced workers enters the private sector.  This is the true face of the modern Labour Party – as nasty and out of touch as any of the Tories they are so desperate to copy.