What The Fuck Does David Cameron Know About Poverty? 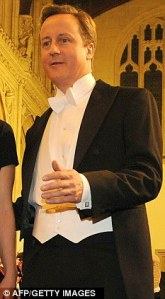 There are few things more vile than listening to a man born into a multi-million pound fortune lecturing the rest of us about whether people are really poor or not.

David Cameron’s pathetic tirade about poverty this week – during which he accused one of the most senior figures in the Catholic Church of lying about the extent of vicious cuts to social security – was exactly what might be expected from an aloof, out of touch Prime Minister who’s never had to do a real day’s work in his life.

Cameron claims that Archbishop of Westminster, Vincent Nichols’ statement that the safety net of the welfare state has disappeared for many people is ‘just not true’.  After all, David Cameron doesn’t know any poor people and life in Chipping Norton is simply spiffing.  He goes on to say how lucky those unable to find a job are to be entitled to just over £70 a week, less than he probably spends on lunch.

What Cameron doesn’t say is that due to the raft of vicious cuts to other benefits, much of that £70 is now likely to be eaten away by the Bedroom Tax, Housing Benefit shortfalls or Council Tax bills.  In some cases these expenses could almost cut that money in half, and after utility bills and even modest debts there could be nothing at all left for food.

For those on out of work sickness or disability benefits, the situation is little better.  The extra £30 a week is unlikely to go far, and the additional costs of living with an illness or disability will soon eat it up.  As rent and bills soar, and benefits are pegged to rise below the rate of inflation, the safety-net has indeed disappeared.  There might be just about enough to pay the landlord, the utility companies and depending where you live Council Tax, but not enough for an adequate diet.  As for money for haircuts, clothes, travel fares, phone calls and all the other vital expenses which enable someone to successfully look for work, not a chance.

Approaching a million benefit claims were sanctioned in just one year the DWP reported this week.  That means people going with nothing at all in some cases, or if they are lucky enough to qualify for Hardship Payments, around £40 a week.  Sanctions can now last up to three years.  The horrifying toll this takes on individuals has been well documented by charities, foodbanks and by thousands of claimants themselves online.  In a move of breath-taking cruelty, even these meagre payments are to be converted to loans under Universal Credit, trapping claimants in debt, potentially for years.

Benefits delays, which could mean waits of up to six months for some disability benefits, also leave people with nothing at all.  Once Crisis Loans provided a scant, but vital emergency service for those whose claims were held up, often due to DWP bungling.  These small loans, which were repayable and barely cost the tax payer a penny, were scrapped as part of Iain Duncan Smith’s welfare reforms.  Short Term Benefit Advances are still available, but the DWP is doing everything it can to hide that fact from claimants.  If a claim is held up due to an honest mistake made by a claimant, then they now face a fine of £50 on top of their wait for benefits.

David Cameron was right about one thing in his spittle-flecked rant this week.  The changes to benefits are not about saving money.  Social Security spending is rising, and measures like the Bedroom Tax, Benefit Cap and the closure of the Independent Living Fund for the most severely disabled people are likely to cost the country far more in the long run.  The social costs of this onslaught, which is set to push millions more children into poverty, will be felt for generations.

Billions is being handed out to the private sector to bully and harass the poorest and in some cases the most vulnerable people in the country.  Whether by humiliating and constant health assessments or forcing people into unpaid work for hours on end, it is no longer enough for this Government just to make the poor destitute, they must be endlessly abused.  Those who had nothing to begin with are now the human sacrifices of austerity, designed to distract from the financial crimes of the rich.

The harder the odds are stacked against you, the harder this Government will kick you.  It is people with mental health conditions, severe illnesses or disabilities, struggling single parents, people battling addiction, those fleeing domestic violence or people who have grown up in care who are facing the full force of this Government’s war on the poor.

This is the twisted morality Cameron speaks of when he pretends he is doing all this to help the poor.  He knows there will never be enough jobs for everyone and that capitalism – and the huge profits made from it by the obscenely rich – depend on unemployment to keep wages down.   David Cameron believes the poor should be punished as a lesson to everyone else.  Work hard, take a pay cut  and do what your boss tells you, or it could be you being abused, impoverished and harassed.

It is the morality of the school bully and it is a contemptible.  David Cameron won the lottery on the day he was born.  Yet still him and his band of braying toffs steal away what little poor people have to survive on, and then tell them their hunger is all in their imagination.  It is the rich out of control and increasingly even some of the rich and powerful themselves are realising that.  But it will only be bloody class vengeance, not Bishops, which can hold these arrogant toffs to account for the suffering they have caused.

This entry was posted in Poverty, Tory Scum and tagged Archbishop of Westminster, david cameron, Vincent Nichols'. Bookmark the permalink.

258 responses to “What The Fuck Does David Cameron Know About Poverty?”