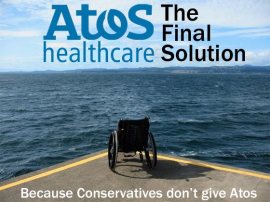 Early figures from the DWP reveal that half of all claims for Personal Independence Payments (PIP) have been rejected. Appalling the figures also show that claimants are waiting up to six months for a decision on their claim whilst a massive backlog is developing.

PIP replaces Disability Living Allowance (DLA) and is currently being rolled out for new claims only in some parts of the UK.  Most DLA claimants will not be re-assessed until Autumn 2015 when the notorious Atos, along with bungling Capita, will begin the work of stripping vital benefits from a fifth  of disabled people.

These figures include people with terminal conditions who are fast tracked through the process under special rules.  When this group is removed from the figures, just 34,200 decisions had been made by December, despite a caseload of 22o,300 people awaiting a decision by the end of the year.

Most of these claims were rejected.  For those not covered by the ‘Special Rules For Terminally Ill People’ only 37% of PIP claims were successful.

Government ministers have lied through their teeth to justify stripping away this vital benefit from disabled people.  Last year Esther Mcvey made the astonishing claim that 50% of DLA claims were successful on the basis of the application form alone with no corroborating medical evidence.  The true figure was around 10%.

The worst impact of PIP is set to come after the next election – and Labour have not said they will halt the re-assessments if they win.  But these early figures give a hint of the vicious shambles to come with almost a quarter of a million disabled people already waiting months on end for a benefit they need – but probably will not get.

This entry was posted in DWP, PIP/Disability Cuts, Welfare Reform. Bookmark the permalink.