Week Of Action Down the Jobcentre Starts August 5th 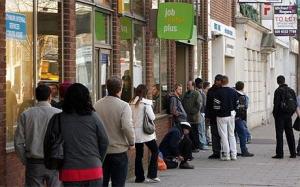 The Civil Service Rank & File Network  (CSRF) has called for action aimed at Jobcentre Plus in the week beginning the 5 August.

“In the week commencing 5 August we encourage civil servants to work with claimants and others who oppose austerity in your area.

• Hold workplace meetings to discuss the type of action needed to win.
• Stage pickets outside of the Jobcentre to bring workers and claimants together in opposition to the government.
• Occupy the Jobcentre and bring business to a halt for as long as you practically can.

The action taken by Edinburgh Coalition Against Poverty against Leith Jobcentre is a brilliant example of the kind of protest we are advocating.

CSRF is a network for civil servants who want to resist the government’s attacks on our terms and conditions. With PCS where they put up a fight, without them where they won’t!”