2% Of Our Workers Don’t Get Paid Boast Marks & Spencer 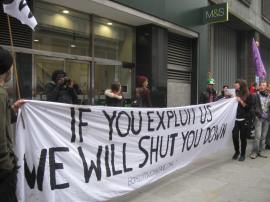 In a brave public relations move Marks & Spencer are boasting how they intend to staff their dreary stores with over a thousand unpaid workers.

The company have announced they intend to provide 1,400 ‘placements’ for young people in a huge extension of their workfare scheme which has already seen over a thousand people work without pay for the company.

They claim this scheme is to help people find work – but only half of those who have been on the scheme have found jobs and not all of those were with M&S.  This is probably around the number who might have been expected to find jobs anyway.  Workfare has a terrible record in actually helping people find a real job and may even trap people in unemployment as the time available to job search disappears.

And it is this which should be pointed out to every young person who thinks that working unpaid for a supermarket or chain store will help then find work.  Some of the richest companies in the UK are colluding with the Government to trick those beginning their working lives into believing they should have to work for free first.

So entrenched has this become that Marks & Spencer are happy to boast that 2% of their work force is not paid. There was a time when companies paid their staff, even whilst they were being trained. Now they are attempting to offload this cost onto unemployed people and the tax payer,  and they think this is something to show off about!

Astonishingly this mass theft of people’s labour is presented as a wonderful opportunity for the people the company is exploiting.  It is certainly is a an opportunity for the greedy bosses at Marks & Spencer.  Unemployed people will be expected to work for a period of four weeks for up to 37 hours a week.  Even at minimum wage, this represents a whopping £1.3 million pound wage subsidy for the company – a subsidy being provided by some of the UK’s poorest people.

It is unclear whether this mass workfare scheme will be linked to formal Jobcentre workfare schemes such as the Work Programme or Work Experience.  After the workfare row blew up last year many companies pulled out of these programmes to launch their own versions of workfare instead – which they claim are entirely voluntary.

However under the present eligibility rules for Jobseekers Allowance, it is difficult to see how workfare can exist without some form of endorsement from the Jobcentre.  Claimants are now expected to spend 35 hours a week looking for work as a condition of claiming unemployment benefits.  Such is the draconian nature of the regime introduced by power crazed fool Iain Duncan Smith, unemployed people are no longer able to choose how and where they look for jobs.

If workfare at Marks and Spencer does not form part of Jobcentre agreed ‘work related activity’ then it is likely to affect a claimant’s eligibility for benefits.  And if it does, whilst it may not be formally mandatory, then young people who refuse this kind of workfare risk being sent on Mandatory Work Activity instead as the DWP takes revenge against those who refuse to work for free.  With claimants living in fear of soaring and punitive benefit sanctions – which can force people into utter destitution for up to three years – almost nothing is really voluntary for those signing on anymore.

Join the Week of Action Against Workfare from the 6th-14th July.

This entry was posted in JSA/Workfare/Work Programme and tagged marks & spencer, work experience. Bookmark the permalink.