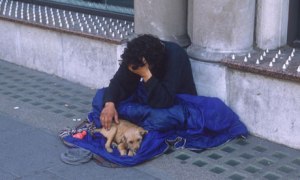 Against a backdrop of soaring street homelessness, the London Borough of Westminster is planning a policy of enforcement to force those with nowhere to go but the streets out of the borough.

The Tory run flagship council have published a consultation ‘Rough Sleeping Strategy’ in which they reveal the shocking fact that 1500 new rough sleepers arrived in Westminster in the financial year 2011/12.

This number is only likely to rise as the cuts to housing benefits take effect and huge swathes of London become unaffordable for those on low incomes.  Westminster Council’s answer to this is not to challenge the vicious cuts or to invest in more housing, but to send the message that “rough sleeping on the streets of Westminster is, quite simply, not an option”.

It is unclear at this stage whether the council will attempt to resurrect plans to ban rough sleeping in the borough, along with soup runs which they claim encourage people to stay on the streets.  Two years ago the council tried to do exactly this – with the shameful connivance of some homelessness charities –  until a storm of protest forced them to back down.  This wasn’t enough for the poverty pimps at Thamesreach and other large homelessness charities who are still lobbying against soup runs in central London.

Those same charities will be interested to learn that Westminster are to replace their dogged loyalty by introducing the same kind of payment by results contracts that have caused such expensive chaos for the floundering Work Programme.

The borough also intends to make more use of volunteers, quite possibly replacing paid support staff with unpaid workers.  Homelessness charities like The Salvation Army, who have been so supportive of workfare, may yet see their staff laid off and replaced with unemployed people forced to work for free.

On the question of the future of soup runs in Westminster, the borough’s  strategy is vague, although one of the stated key priorities is to: “Reduce the number of reasons for rough sleepers to come to, or remain on, the streets of Westminster”.

The Council are clear in their intentions for those who arrive in the borough and are unable to secure a roof over their heads.  In a move reminiscent of medieval laws aimed at stopping vagrancy, Westminster insist that when “workers are dealing with individuals new to the streets, the message will be one of reconnection to their home community”.

This would seem to apply to both UK born street homeless people and those from Eastern Europe in a policy that can roughly be summarised as ‘send ’em back’.

With no new legislation or bye-laws being openly proposed by Westminster Council (and it is early days)  it is unclear how exactly they plan to make one of the richest areas of the world a no go area for the destitute.

The final section in the document on enforcement gives a hint of their plans.  As well as a crack down on beggars, the council is planning to crack down on “unacceptable behaviour associated with rough sleeping”.

This includes, according to the council, drug use, litter and street drinking.  Rough sleeping ‘hot spots’ in the borough, where people sleep in groups for safety, will be targeted.  It seems that Westminster’s approach is likely to be one of harassment rather than direct enforcement, with council busy-bodies, volunteers and police ganging up to drive homeless people from the borough.  A recent raid on rough sleepers in Ilford, in which sleeping bags and food were seized by police, gives a chilling example of how this enforcement may look in practice.

The raft of cuts to housing benefits could mean unprecedented homelessness in the UK.  As London authorities know only too well, homeless people often flock to city centres for the scant resources that might be available.  Whilst this strategy leaves as many questions as it does answers, it is clear that those who find themselves on the streets of  central London are to face a desperate time at the hands of Westminster Council.

35 responses to “Westminster Council Plot Homelessness Strategy Based On Enforcement”