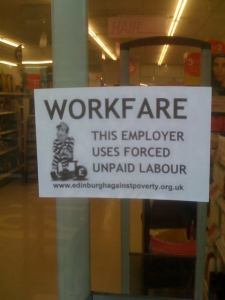 In a major victory for campaigners, the DWP seem to be confirming that they have scrapped the Community Action Programme (CAP), the rolling workfare scheme which had been planned for those leaving the Work Programme.

The Government had planned to force all those who have been unemployed over two years onto near permanent workfare.  This scheme was recently trialled with disastrous results as participants were found to be no more likely to find work than those who had not attended the programme.

Then the Community Action Programme was dragged through the courts in the case brought by Cait Reilly and Jamieson Wilson.  Along with other workfare measures the CAP was found to be unlawful, but unlike the other schemes, there was no retroactive legislation introduced to bring it in line with the law.

It now seems it has been abandoned altogether, with an announcement from the DWP today of a new scheme involving ‘a hit squad of specialist advisers’ based in Jobcentres.  It seems that the floundering welfare-to-work companies in charge of the Work Programme are no longer to be trusted with those who have been unemployed for over two years.

Workfare is still likely to be involved in the scheme, with threats of Mandatory Work Activity for participants – four weeks workfare as opposed to six months.  This scaling back is almost certainly down to the huge resistance to workfare which has forced most of the UK’s best known charities to withdraw and refuse to provide further placements.

According to the skiving Employment Minister Mark Hoban, claimants on the latest scheme will also be forced to sign up for Universal Jobmatch – the bodged government job-seeking website riddled with spam and scam vacancies.  The DWP warn that these claimants will also be required to tick the box allowing Jobcentre staff to spy on their accounts – a move of dubious legality under data protection laws.

Hoban is threatening that the new scheme will be tough, intensive and uncompromising.  Yet with Jobcentres already creaking under the strain of the DWP’s ever more hare-brained schemes, it seems hard to imagine how Jobcentre staff will find the time to provide daily intensive support to over half a million people.

One thing that can be guaranteed is that whatever they do won’t work.  From Tony Blair’s New Deal to Iain Duncan Smith’s bungled Work Programme, not one of these measures has come even close to the aim of ending long term unemployment.  Despite the toughest ever welfare reforms, unemployment has risen over the last three months and long term unemployment continues to soar.

And whilst government ministers insist that unemployment is caused by unemployed people, then billions more will be poured down the drain to do little more than harass, impoverish and stigmatise those unable to find a job.