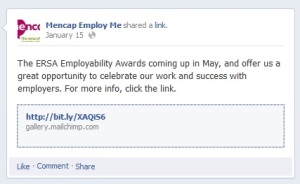 Decent people everywhere will be appalled to learn that the charity Mencap recently sponsored an award at the first ever ERSA Employability Awards.

ERSA are the trade body who were formed in 2005 to lie on behalf of the money grabbing welfare-to-work industry .  They represent the companies such as A4e and G4S who are being paid billions to harass and bully benefit claimants on the Government’s Work Programme.

Despite a disastrous year for this sector, during which almost no-one has found work through the Work Programme,  ERSA seem to have plenty of cash to splash out on a back-slapping awards ceremony.  Even the skiving Employment Minister Mark Hoban managed to drag himself off his tax-payer funded silk cushions to turn up for a free drink.

Mencap sponsored the Large Employer of the Year Award, at a cost of a cool £1000 according to advance publicity for the awards (pdf).  This award to went to B&M Stores, a company who have repeatedly been accused of using workfare and who work closely with poverty pimps Ingeus to recruit staff.

Mencap donors and supporters may be shocked to learn the charity is handing out money to cheer on the welfare-to-work sector, but sadly for those following welfare reform this is no surprise.  Whilst many large disability charities, including Mencap, have distanced themselves from workfare in their shops, they still have their snouts firmly in the welfare reform trough.  Scope, RNIB, Leonard Cheshire Disability and MIND are just some of the charities who, along with Mencap, are paid by the welfare-to-work sector to manage Work Programme sub-contracts.

And as this award ceremony shows, behind the scenes charity bosses are quite happy to stuff their faces with vol au vents and hand out money intended for disabled people to pay for glitzy love-ins with the worst of the corporate sector.

Another familiar face at the awards was Matthew Oakley, who was adding yet another lucrative string to his own personal welfare-to-work racket.  Oakley is a leading member of the right wing think-tank, the Policy Exchange, who recommended many of the current welfare reforms.  Oakley is also paid  £256.80 a day by the tax payer as a member of the Social Security Advisory Committee, the so called independent body of so called experts that scrutinise those welfare reforms.  And last week Oakley was a judge at an awards ceremony handing out prizes to the companieswho are paid to implement the reforms.

Over the last eighteen months, any involvement with forced unpaid labour has become a public relations nightmare for both private companies and charities alike.  These awards suggest the welfare-to-work sector is fighting back.  Companies using workfare may face boycotts and protests, but they might also get a shiny award, sponsored by a national charity to show how lovely they really are.  All those who object to Mencap acting as charitable cover for the crimes of the welfare-to-work sector can contact them on facebook or on twitter @mencap_charity.