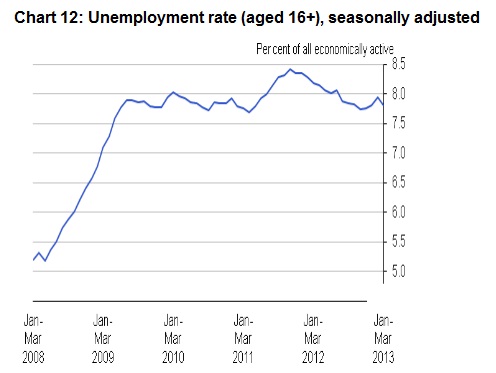 In an encouraging statement for anti-workfare campaigners, the DWP are claiming that today’s rise in unemployment is partly down to a fall in the numbers of people on Government-supported training schemes – otherwise known as workfare.

According to the Department, the number of people in work fell by over 47,000 over the last three months – which they say ‘reflects’ amongst other things a drop of 16,000  in the numbers on Government employment schemes.

For two years now thousands of people have been involved in taking action to bring an end to unpaid work.  High profile companies and charities alike have abandoned the scheme after storms of protest both online and in the streets.

The number of people working unpaid has now fallen every month since February showing just how effective these protests have been.  This is no time for complacency however.  There are still 147,000 people on some form of government training scheme*.  Those still quite happily using workfare workers such as @salvationarmyuk, @TCVtweets and @Poundland should expect to come under unprecedented pressure from customers over the next few months as resistance to forced unpaid work is not going anywhere.

With the Government unable to use workfare to hide the true state of the labour market, unemployment overall has risen by 15,000 people – the third monthly rise. This has been accompanied by small falls in the Claimant Count, the number of people actually claiming Job Seeker’s Allowance.  One possible explanation for this is that these smalls drops are simply due to benefit eligibility being toughened, meaning more people are unemployed, but less are receiving benefits.

One thing is clear, which is that despite two years of benefit reforms along with ever increased conditionality for those receiving benefits and rocketing use of benefit sanctions, the unemployment rate is barely changed from the depth of the first recession in 2009.

The Work Programme, aimed at bringing down long term unemployment, has also once again revealed to be a complete disaster by today’s figures.  The number of people out of work over one year rose by 23,000 over the last three months, and the number unemployed for over two years soared by 21,000 – a rise of just under five percent.

Iain Duncan Smith has based his welfare reforms on claims that unemployment is caused by unemployed people –  placing the scroungers narrative at the heart of everything he does.  If this is true, then the huge numbers of people still out of work for long periods suggests that his welfare reforms are simply making people lazy and workshy on a massive scale.

If the alternative is true, that unemployment is not caused by unemployed people but is a structural part of capitalism which is made worse by poor economic growth,  then his current brutal dismantling of social security is based on nothing more than lies and contempt for the poor.

Attempting to blame the public rather than the government for high unemployment has been a neat trick, for a while.  Acres of space in the gutter press has been devoted to pursuing this myth, with the aim of stigmatising and finally impoverishing claimants. But you can’t fool all of the people all of the time, and if unemployment continues to stay this high, then Iain Duncan Smith’s benefit bullshitting could start to unravel just in time for the next election.

*not all of these people will be on workfare, some may be taking part in the subsidised-employment Youth Contract racket or other schemes.  It is equally true that not everyone on workfare will be included in this number.

This months Labour Market Statistics are at: http://www.ons.gov.uk/ons/rel/lms/labour-market-statistics/may-2013/index.html