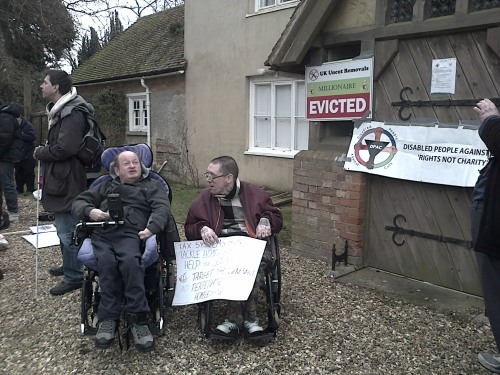 Up to 3000 people from across the UK flocked to Thatcher’s Death Party in Trafalgar Square last night for a boisterous celebration despite the pouring rain.

Not to be outdone, George Osborne’s constituency office was picketed in Cheshire whilst protests also took place in Brixton, Chelmsford and Birmingham.  Meanwhile anti-workfare protesters took on Homebase over their continued use of unpaid labour with protests outside their stores in London and Bristol.

A theme of all these events is accountability, whether that be taking companies to task for exploiting government policies to get free labour, or personally challenging the politicians who made those policies.

For too long a barely elected political class have remained immune to the consequences of their actions.  Hidden away in their countryside mansions, they barely ever meet the victims of their policies.  The national joke which is the House of Commons resembles little more than a public school debating society.  When a simpering idiot like George Osborne condemns millions to poverty he should be stricken with terror that a member of the opposition will leap across the house and stove his head in with the mace.  Instead Ed Balls makes silly gestures with his hands and his chums gaffaw at the hilarity of it all.

And then they all have drinkies, in the same bars and the same clubs, safe in the knowledge that they are with people just like them.

UK Uncut and DPAC made it personal yesterday and helped to burst the bubble of privilege that politicians have come to take for granted.  The Thatcher Death Party showed that even in death they will be held to account.

Much of the media – who drink in the same bars and clubs as MPs and went to the same schools and universities – have played down last nights raucous events in Trafalgar Square.  Yet three thousand people coming out onto the streets at short notice in the pouring rain to celebrate the death of a former Prime Minister is unprecedented in modern history.  And despite some petty police provocation, the event remained what it was intended to be, a celebration of the end of a rancid tyrant’s life.

The handful of EDL stragglers called out by the Daily Telegraph failed to make an impact on the festivities whilst any attempts at aggressive policing were firmly dealt with by the crowd.  But this didn’t spoil the mood and the drink flowed until late into the night until the constant rain caused even the hardiest to head for the pub.

As austerity really begins to bite this year, it will be Thatcher’s legacy, not her corpse, that draws mass protest and civil disorder.  But for all who suffered under her government, it was good to know that even in her passing she was still despised.

There’s more action to come this week aimed at stopping welfare reform, with a protest against the benefit cap in Stratford tomorrow (Monday 15th) whilst Liverpool begins a week of action against workfare.