ASDA Are Austerity Profiteers – Boycott Them! 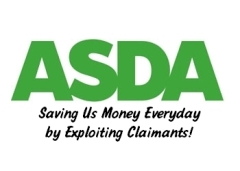 A call has gone out to boycott supermarket chain ASDA due to their obscene profiteering from the current economic crisis and the increasing poverty faced by many of their customers.

ASDA are not only ones of the UK’s largest workfare exploiters, but have also  just been given a smart-card contract by Birmingham City Council.  This is the replacement for the Crisis Loan scheme, the small loans which were available to claimants and people on a low income in an emergency, such as having been a victim of theft.

These loans – which averaged around £60 per person and had to be repaid – have now been abolished by Iain Duncan Smith.  Instead local authorities are to provide this vital but fast disappearing support.

In Birmingham recipients of short term help will no longer be given cash, but instead a smart card which can only be spent at ASDA.  This is despite the fact many people in receipt of these cards may be unable to afford the fares to their nearest monstrous out of town supermarket.  ASDA could have chosen to stand with their customers – many of whom are on low incomes – and refused to take part in such an offensive scheme which treats those with least like children whilst lining the pocket of supermarket bosses.  Instead the money grabbing leeches in charge of the company are only to happy to force claimants to have no choice but to shop in their supermarkets.

This is hardly surprising.  ASDA are well known for also forcing people to work in their stores without pay.  A post on Boycott Workfare’s website reveals how ASDA took on unpaid workers to deal with the Christmas rush and even forced people to work without pay on Christmas Eve and New Year’s Day.

In truth ASDA were chomping at the bit of austerity and the opportunities for exploitation it might bring shortly after this Government weren’t elected. In October 2010, Chairman of the company Andy Bond was a signatory to a letter to The Daily Telegraph which claimed that “The private sector should be more than capable of generating additional jobs to replace those lost in the public sector, and the redeployment of people to more productive activities will improve economic performance, so generating more employment opportunities.”

It turns out the company had no intention of paying wages for many of those employment opportunities they claimed might be generated.

Claimants in a crisis may be forced to shop at ASDA but the rest of us don’t have to.  Boycott these money grabbing parasites and spread the word about how they treat their customers.  Follow @BoycottAsda2013 on twitter to keep up with the campaign and tell ASDA what you think on facebook a: http://www.facebook.com/Asda

180 responses to “ASDA Are Austerity Profiteers – Boycott Them!”