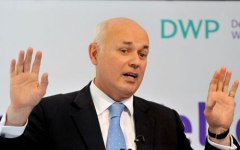 It is inconceivable that Iain Duncan Smith did not know about jobcentre targets to sanction benefit claims.  It is contemptible that he is now attempting to blame jobcentre staff for his policy.

A story in published by The Guardian last night contains details from a whistle-blower at Walthamstow Jobcentre which confirm the existence of ‘sanction’ league tables.  According to the paper:

“Ruth King, a jobcentre adviser manager, discloses in the email that she has received “the stricter benefit regime” figures for her area, adding: “As you can see Walthamstow are 95th in the league table out of only 109″ – the number of jobcentres in London and the home counties.”

Iain Duncan Smith tried to shrug of this damning testimony in Parliament this morning by saying a reminder was being sent out to jobcentres that they are not supposed to get caught using targets to sanction claimants.

Jobcentres management structures are broken down into regions and districts.  As these league tables cover the whole of the London and the Home Counties, they can only have been authorised by regional management who are headed up by a Work Service Director.*

It is not Jobcentre staff  who are responsible for these league tables, but senior DWP management.  It is astonishing that Iain Duncan Smith can claim he knows nothing about what is taking place under his very nose.

The PCS Union know, district and regional jobcentre management know, jobcentre staff know and claimants certainly know.  Are Iain Duncan Smith and Mark Hoban really so out of touch with what their own managers are doing that they are the only people in the entire organisation who don’t have a clue what’s going on?

Even when presented with the evidence in Parliament this morning Iain Duncan Smith still bleated :  “There are no targets for sanctions”.  The DWP have been caught bang to rights but still ministers plead innocence.

Iain Duncan Smith has said that anyone using targets to sanction claimants will be disciplined.  For once in his life he should follow the Seven Principles of Public Life by being honest, open and accountable and then sacking himself.

*the DWP publish a handy list of regional and district managers for claimants wishing to make complaints at a senior level.  Phone numbers and emails are included (also on google in case it disappears):  http://www.dwp.gov.uk/docs/jcp-district-managers.pdf

This entry was posted in DWP, Welfare Reform and tagged benefit sanctions, Iain Duncan Smith, Jobcentre Plus. Bookmark the permalink.

146 responses to “Iain Duncan Smith is a Lying Bastard”