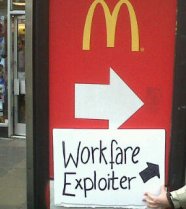 Two determined groups of workfare sleuths hit the streets of both north and south London yesterday in advance of the upcoming National Week of Action Against Workfare which begins tomorrow.

In both Kentish Town and Elephant and Castle many shops and businesses were visited to ask about their use of forced unpaid labour.  In a blow to Iain Duncan Smith’s plans for mass workfare, yesterday’s investigation revealed forced labour on some High Streets seems to have almost disappeared.

In Kentish Town, branches of  Subway, Poundstretcher and Mcdonalds all admitted they had used workfare in the past but had chosen not to continue.  All said that unpaid workers may be employed at other branches of these household names.  Both the PDSA and Age UK charity shop were quick to state they no longer took part in workfare schemes.  In fact the only well known name in Kentish Town (one independent business remains under investigation) who openly admitted to workfare were Oxfam.  Which frankly, after everything that’s happened, is disappointing.

In Elephant and Castle the lack of workfare placements was equally apparent with only Poundland admitting to using unemployed claimants as free labour.  This is in stark contrast to just over a year ago, when workfare seemed to riddle every High Street in the UK.

Whilst the results of this sleuth may not be typical, with so many large companies and charities withdrawing from the scheme, it does seem that High Street workfare has suffered a huge blow.  Unfortunately this does not mean the fight is over.  According to the monthly Labour Force Survey, the number of people on some form of workfare scheme are at record levels – although many of these may be Youth Apprentices, who may not be directly coerced but are paid the repugnant sum of just £2.65 per hour.

More than ever it is vital to know who is using workfare which seems increasingly hidden from public view.  If you know of a workfare exploiter name and shame them by visiting: http://www.boycottworkfare.org/?page_id=1703

And join the Week of Action Against Workfare which will see actions and protests around the UK aimed at bringing a final end to forced labour.  For the latest details of all events visit: http://www.boycottworkfare.org/?p=1996

Please help spread the word about all events.

On Tuesday Iain Duncan Smith will attempt to rewrite history and introduce new regulations to override the recent Appeal Court judgement which declared many previous benefit sanctions illegal and therefore repayable.  Sources have suggested Labour may support this vile move.  The Lib Dems almost certainly will.  Contact your local MP tomorrow (Monday 18th March) to urgently demand that they will not vote for this bill which steals money from the poorest and makes a laughing stock of an independent judiciary.  It takes just two minutes via this page set up by the PCS Union.

This entry was posted in DWP, Fighting Back, JSA/Workfare/Work Programme and tagged boycott workfare, National Week of Action Against Workfare, workfare sleuth. Bookmark the permalink.