Is Workfare Behind the Work Programme Disaster? 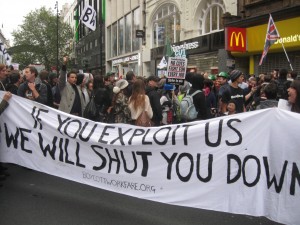 Today’s damning report from the Public Accounts Committee (PAC) reveals the shocking revelation that Iain Duncan Smith’s flagship Work Programme is performing significantly worse than if the DWP had done nothing at all.

According to the PAC, just 3.6% of claimants have found long term jobs on the Work Programme.  The DWP had estimated that 9.2% of mainstream unemployed claimants would have been expected to find work had the programme not been launched.

This appalling statistic reveals three things.  The first, which to anyone but a fucking idiot like Iain Duncan Smith is self evident, is that there are no jobs.  Unemployment is not caused by unemployed people as lying DWP ministers have repeatedly attempted to claim.  1,700 so called skivers recently applied for just eight jobs – of which only three were full time and some paid minimum wage – at Costa Coffee in Nottingham.

The second reason for the desperate performance of the scheme is that the Work Programme is broken from top to bottom.  Greedy welfare to work companies are simply sitting back and picking up Start Fees (which last year could be as high as £600 per person) and then letting nature take its course.  Should someone find work under their own steam they pick up a huge tax payer funded cheque.  If they don’t, not to worry, so little training and support is being provided on the programme that it’s not like the the welfare-to-work companies actually spent anything.

But even these two reasons don’t explain why the Work Programme seems to be causing, not curing long term unemployment.  And one of the reasons for that must be record numbers of people in unpaid work for High Street names like Superdrug, Argos and Shoezone.

There is increasing evidence of profit making companies using workfare to replace real jobs.  Claims that taking on Work Experience placements is unprofitable due to the time spent offering training (stop laughing) are demolished by the reports of companies taking on workfare staff to deal with the Christmas rush.  There have even been shocking reports that Jobcentre staff are asking companies to convert real paid jobs to Work Experience placements just to meet DWP targets.

Record numbers of claimants are now working unpaid, whether due to being forced into it under threat of benefit sanctions, or having ‘volunteered’.  At one point last year 166,000 people were on such schemes, the highest figure since Tony Blair’s mass workfare experiment in 1998.  As contemptible as Blair’s forced labour project was, many young people on the New Deal were in subsidised employment and paid £60 a week, more than workfare participants under 25 now receive.  New Deal participants were also given day release training to work towards NVQs (which admittedly often never materialised due to welfare to work thieves like A4e raiding the cash put aside for training).

There is no such subsidy on the Work Programme, or the other workfare schemes.  Even the famous extra tenner, a part of almost all welfare to work provision since the 1980s and intended to pay for things like lunch, has been scrapped.  As for acredited training and qualifications, forget it.  The sad truth is that many Work Programme participants have been forced to give up college courses or genuine volunteering to work for companies like Poundland for no pay.

With such poor results and lack of any decent training on the Work Programme, it could be assumed this is welfare-to-work on the cheap.  Yet the whole embarrassing shambles has been hugely expensive, with costs soon set to hit a billion pounds – around one quarter of the figure spent on unemployment benefits annually.

To place this figure in context, this amount could have saved the Remploy factories from closure and prevented the scrapping of the Independent Living Fund for the most seriously disabled people, and still left millions to spare.

Whilst unemployed, sick or disabled people face poverty and homelessness there seems to be an unending stream of tax payer’s cash available for the DWP to pointlessly harass and bully claimants.  The Work Programme is increasing unemployment and costing a fortune.  Welcome to the crazy world of Iain Duncan Smith’s bodged welfare reforms.

Join the Week of Action Against Workfare beginning on March 18th: http://www.boycottworkfare.org/?p=1996

97 responses to “Is Workfare Behind the Work Programme Disaster?”