The Case of the Disappearing Workfare Scheme 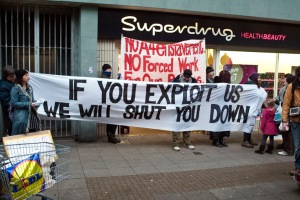 It seems that despite Iain Duncan Smith’s tantrum yesterday – when he insisted he would not back down on forced work for the poor – one major chunk of the Government’s workfare policies has disappeared.

The floundering Community Action Programme (CAP) is one of the nastiest workfare schemes, which sentences people to six months unpaid work simply for being long term unemployed.  This scheme was intended for the 96.5% of people who aren’t likely to find work during the two year Work Programme.  The message was clear, if you can’t find a job in two years then you will be expected to work, full time, for nothing.

The ‘Trailblazer’ for this scheme was one of the programmes challenged in the courts recently.  Jamieson Wilson, a former lorry driver, was stripped of benefits and left destitute after refusing to undertake unpaid work on the scheme.  Along with Cait Reilly, who was forced to work in Poundland for no pay on a different programme, they took their case to the High Court.

As is well known now, both of the scheme were found to be unlawful on largely technical grounds.  Simply put, neither the legislation behind the schemes, or the information given to claimants, was legally sufficient.  The DWP’s panicky response was to issue new regulations and rush them before Parliament.

The new regulations make no mention of the Community Action Programme, or any comparable scheme, which means for now, the programme would seem to be still illegal.

It is possible the DWP are planning to table some specific regulations for this scheme just as soon as skiving Employment Minister Mark Hoban makes it into the office.  It is equally possible they fucked up the new regulations and forgot about it.  In fact with the DWP mired in chaos, almost anything seems plausible at the moment.

The scheme has not yet been launched nationally and the Trailblazer pilots are over, so this is unlikely to affect anyone currently on workfare.  But it does suggest that a major plank of Iain Duncan Smith’s bodged welfare reforms is either being rethought, or has been abandoned completely.

This is hardly surprising.  The early analysis of the scheme revealed it had no impact in actually helping people find work.  More importantly, providers were struggling to find work placements.  This problem can only have become much worse recently as a growing number of charities snub the Government’s workfare obsession.  Even workfare profiteers like Poundland are attempting to distance themselves from the DWP shambles (whilst still attempting, possibly illegally, to ensure they have a steady stream of unpaid workers).

Lack of placements has dogged workfare programmes ever since Tony Blair launched the first mass workfare scheme in the late 90s with the New Deal for Young People.  The truth is a lot of charity work is quite specialised and outside of charity shops the voluntary sector has no real need of hundreds of thousands of unpaid full time staff.  Now even the charity shops are pulling out, many in disgust at the brutal sanctions regime and new powers to send sick and disabled claimants to work unpaid.

This hasn’t stopped some charities, such as The Conservation Volunteers (@tcvtweets) or Sue Ryder (@Sue_Ryder), who are only too happy to force people to work for free.  Many more companies, including Poundland, but also Superdrug and Argos, have discovered it can be profitable to take on unpaid temporary staff for work which involves little training.

It’s too early to say whether CAP is gone for good or the real impact of last week’s judgement on workfare.  There is even speculation as to whether the new regulations, which are only slightly less vague than the old ones, would withstand another legal challenge.

The DWP is ploughing ahead regardless of the consequences and insists that it’s business as usual on the workfare gravy train and no-one will be repaid sanctioned benefits.  The lawyers disagree.  Iain Duncan Smith is near meltdown, picking a fight with not just shelf stackers, by insisting they work for free, but also the Judiciary and bizarrely, even geologists.

There is still a long way to go to end workfare.  But if you kick something hard enough and for long enough it will break eventually.  Join the Week of Action Against Workfare beginning on 18th March and help bring a final end to forced labour for good: http://www.boycottworkfare.org/?p=1996

A highly recommended piece about the fight against workfare up until now can be read at: http://www.redpepper.org.uk/workfare-a-policy-on-the-brink/

120 responses to “The Case of the Disappearing Workfare Scheme”