Some Workfare Workers Will Be Violent and Aggresive Warn DWP 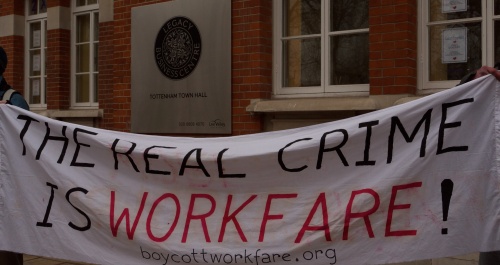 Some people sent to work for charities by the Jobcentre are likely to behave violently and aggressively the DWP have warned companies tasked with finding work placements.

The stark warning comes in the newly revised Provider Guidance for the Government’s Mandatory Work Activity (MWA) scheme.  This document outlines the rules of the scheme to private contractors such as A4e.  These companies pick up lucrative fees for every person they place in an in unpaid work placement.  Thousands of people have been sent to work for four weeks without pay in charity shops and other community projects.  Those who refuse or fail to turn up face increasingly brutal benefit sanctions.

Charity bosses will be horrified to learn that the DWP warn:

“You may experience a wide range of behaviour from the customer group referred to MWA. This may include those customers who exhibit difficult, aggressive, or sometimes violent behaviour. However, you cannot select the customers with whom you work. Generic guidance provides further details.”

The Generic Guidance is the rules which apply across all welfare to work contracts with the DWP and can be found at: http://www.dwp.gov.uk/supplying-dwp/what-we-buy/welfare-to-work-services/provider-guidance/framework-generic-guidance.shtml

Of most concern is that this document reveals:

“Participants will not be excluded on the basis of potentially violent or inappropriate behaviour (e.g. racial or sexual verbal assault, foul language or the issuing of threats, or in the event that the participant refuses to engage).”

At this point it is critical to point out that benefit claimants are no more likely to be violent, aggressive, racist or sexually abusive than any other potential employees.

This is something that employers usually mitigate with CRB checks, interviews and references from former employers.  The key point here is that none of these checks have been made by either the DWP or welfare-to-work companies when referring people to workfare.

Often the charities happy to exploit people on workfare have not even interviewed potential staff.  The welfare-to-work company and the Jobcentre are the only people who have had previous contact with the claimant.

Welfare-to-work companies only get paid if they secure someone a placement with a charity.  The rules state that they must not turn anyone down.  Can companies like A4e really be trusted to throw away lucrative payments by warning charities that a potential worker has previously displayed threatening, sexually abusive or racist behaviour?