The Corporate Take Over of the Third Sector Begins 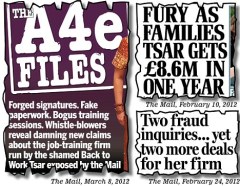 Iain Duncan Smith’s plans to use private sector poverty pimps to fix social problems is a long cherished business objective of the scandal rocked A4e and other welfare to work comnpanies.

His latest crazy scheme will be based on the floundering Work Programme, under which private companies have been paid almost a billion pounds to fail to fix soaring long term unemployment.  So proud is Iain Duncan Smith of this unmitigated disaster that he now plans to export the model to other areas of social policy.

Welfare to work company A4e are best known for harassing unemployed and disabled people into attending sub-standard training or workfare.  The company however has had long held objectives to spread their rancid tentacles into all areas of social care.

In 2008 A4e attempted to launch a community website on which they sought to offer advice on all aspects of life from health to housing.  Originally only available to A4e inmates on government training schemes, the hope was that the site would become a hub for people to discuss and seek advice on a range of personal problems.

The website was soon abandoned when A4e realised that were it opened to public registration then it would fast develop into a forum for people to pour well deserved abuse onto the company.  In a telling sign of things to come however, much of the information on the site was concerned with highly personal topics such as health, relationships and even people’s sex lives.

Whilst much of this seemed like the kind of hippy-dippy bullshit that the company regularly espoused, this was an early, if bodged,  attempt to break into the social care market.

A4e, whose work already includes contracts with probation services and legal advice centres, now boast on their website of: “improving access to health and social case services and empowering disabled people through employment and advisory services”.

Increasingly charitable organisations who work with so called vulnerable people have been pushed into marketisation.  This means charities bidding for contracts, often against similar charities, to carry out a certain social purpose.  This could be housing street homeless people, providing services for drug users, running care homes or similar roles which would have once been the preserve of national and local government.

Iain Duncan Smith’s announcement last week pointed to plans to open up far more areas of social care services to the market than ever before.

When Blair brought the private sector into employment support services, companies like A4e and G4s soon muscled out the smaller community based job clubs and unemployed workers centres.  Larger charities were pushed into the role of sub-contractors, carrying out the dirty work for the money grabbing parasites who ran the sector.

Under Iain Duncan Smith’s Work Programme the role of charities has become almost indistinguishable from profit hungry welfare to work companies.  Charities such as Scope, Mencap, MIND, RNIB and many more have been only to happy to collude with brutal benefit sanctions and workfare.  With the take over of the Welfare to Work sector almost complete, companies like A4e are now looking for new ground in their drive to commodify and profit from the poor.

Charities only have themselves to blame for this erosion of their role in providing social care.  A united front declaring non co-operation with the government’s attempts to privatise welfare services could well have stopped welfare reform in it’s tracks.  Instead greedy charity bosses have paid themselves huge salaries by picking up lucrative welfare to work contracts with barely a thought for the needs of their service users.

The direction of travel is now clear.  A4e have already aggressively moved in on legal advice, resulting in the closure of Citizens Advice Centres.  Their ambitions do not end there.  Gormless charity bosses will only be able to look on in despair as vultures like A4e and Serco swoop in to take over relationship mediation, probation services, care homes, homelessness hostels and any other slice of the Third Sector that they can gobble up.

And some of us will say ‘we told you so’.  Not that it will matter anymore.