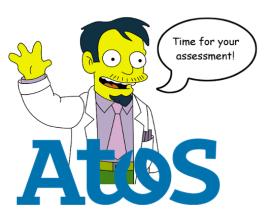 Bungling DWP officials have published the Atos tender document for the new Personal Independence Payment and given away reams of highly confidential commercial information in the process.

Atos, who notoriously carry out the Work Capability Assessment for those on out of work sickness and disability benefits, have been given the contract to manage the assessments for PIP.  These assessments will be based on the same crude computer based tests as the WCA and are to be used to re-assess disabled people currently claiming Disability Living Allowance.  The stated aim is to strip benefits from 20% of disabled people.

Astonishingly Atos claim in their tender that they have a “successful record of engagement with Claimant Representative Groups”, including direct action campaign group Disabled People Against Cuts (DPAC).  In truth DPAC have been behind many of the protests held outside Atos’ offices including the recent well attended protest at their London headquarters which was followed by an occupation of the DWP.

DPAC are seeking legal advice on challenging Atos’ lie in their tender for the lucrative PIP contract.

The documents can be found at: http://www.parliament.uk/business/publications/business-papers/commons/deposited-papers/?page=4#toggle-1399

UPDATE: Files can no longer be copied and pasted meaning redacted info is no longer visible.  Use google cache instead, to find out how visit: https://johnnyvoid.wordpress.com/2012/10/19/google-cache-strikes-again-get-yer-atos-corporate-secrets/

Already the documents have been widely distributed to disability and welfare claimants and details from the tender are beginning to emerge – such as the fact Atos are planning PIP assessments on the cheap by only hiring 1 doctor for every 50 physiotherapists.

Many parts of the documents are redacted, meaning some information is blacked out.  Unfortunately the DWP – currently tasked with building the most complex IT system ever designed in the world to handle the change to the new Universal Credit benefits system – don’t appear to know much about computers.

To read the redacted text all that needs to be done is to simply convert the PDF files to a text file.  This can be bodged simply by opening the file as a PDF, then go to Edit – Select All – Copy and then pasting the text into notepad.  (Some of the tables in the documents have redacted information which cannot be viewed in this way.  It may be possible to extract this info by other means, I don’t know, any ideas please mention in the comments)

Whilst it is not uncommon for tender documents to be released, many details, such as personal names and specific technical or financial information, are redacted under Freedom of Information laws relating to privacy and commercial confidentiality.

Not so at the Department of Work and Pensions where this information has been left lying around on the internet for anyone to access.  DWP contractors should take note.  Whilst the inept clown Iain Duncan Smith is in charge, your dirty little secrets are not safe at the DWP.

It is possible these documents may disappear offline very soon or even be redacted properly.  Download them now whilst you still can.

The main tender documents are: